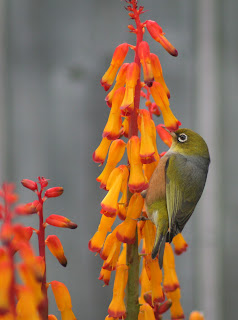 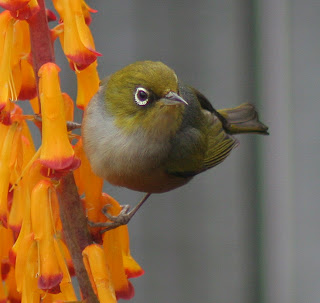 Today was cold and wet but I managed to get some photos of some waxeyes in my Aunty Veda's garden. Hard to get good shots as it was low light and my fingers were cold! These little guys were feeding on nectar from these orange flowers called lackenalia.... I know I spelled that wrong! Veda also has a birdbath used by a blackbird every day about lunchtime so I must get some photos of that one day soon.

The Whakatane Beacon published my photo of the Pied Shag I took last week. On a lovely sunny morning I was on the riverbank photographing kingfishers diving for little fish and crabs. I heard footsteps plopping along in the mud and looked up to see a shag heading towards me. I aimed my camera at him and through my zoom lens I saw that he was in trouble. He had some nylon fishing line around his neck and over one wing. On closer inspection I think the line disapeared into his mouth which probably meant there was a hook on the end of it.....NOT GOOD! I knew if I tried to get to him he would just go into the water so I sat and thought over my options. I took some photos, (hopefully to help educate people to be more ca 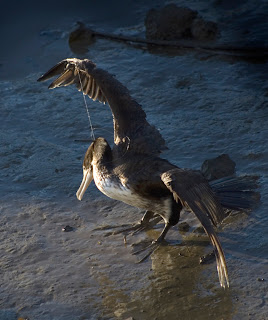 reful with fishing lines) then went to the info centre where the office girl phoned the Department of conservation for me. I sent Troy a text and he joined me to help. At that stage all we could do was wait for D.O.C. to turn up with a net while preventing the bird from escaping back into the water. After a while Troy phoned to get some info about when to expect help and at this stage the bird became quite distressed trying to free itself from the line. In his struggles the shag toppled over and I decided to take the opportunity to grab him then. As I got to him and bent down to grab it he turned and snapped his beak at me. I was totally expecting that reaction but with that long neck of his he almost took my eye out! My nerve failed me and he got past and into the river. I was SO BUMMED! I could have saved it but blew my chance. I followed him nearly all the way down to the river mouth but eventually lost him. The poor thing is probably doomed to a lingering death now. I hate to think of it. But the Beacon did a little story on it and quoted Rosemary Tulley from bird rescue who said people need to be more careful with fishing line and hooks etc.

On a happier note I finished my Rockpool painting. Its very stylised but not actually as stylised as I wanted, for some reason I keep reverting to realism even tho I try SO HARD not to! I'm happy with it though. I really enjoyed doing it, it was a fun painting to do and I hope it shows. I tried to depict the pool as tho it was a window into another dimension which in reality I think it is.