Waxeyes, kingfishers and those damned seagulls. 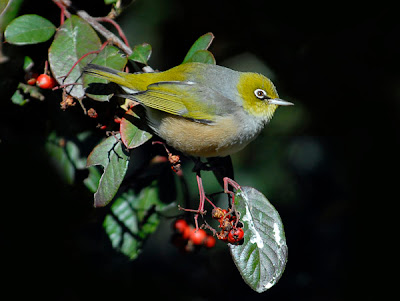 We have a large cotoneaster tree in our front yard that is full of little red berries...well at least it was full a week or so ago. The waxeyes and blackbirds have been feasting on the berries with great gusto so the tree has been nearly stripped within a matter of days. The waxeyes in particular have descended in great flocks and gobbled them whole - quite a feat for such a tiny bird. 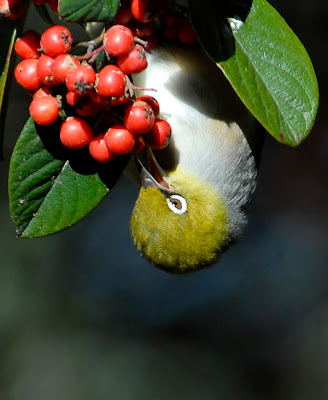 Troy had worked one weekend (he's a photojournalist) and had bought his D200 work camera home with him. On Sunday afternoon I took it out to the tree and got these shots with a Nikon 100-400VR lens and was really pleased with the results. Its just so bloody heavy though! Hurt my shoulder after a while. I'm such a wuss!

I love my Canon camera because its nice and light and fits my small hands but I must admit I have been drooling over the 100-400 image stabilised Canon lens in Laser. Just think what I could do with that... Shame its $3,500!!! 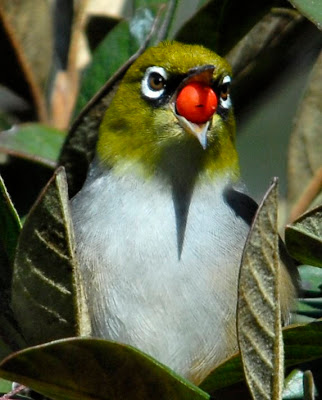 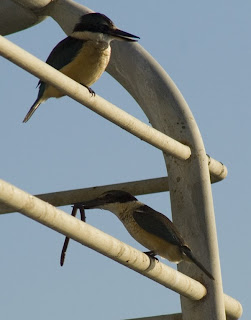 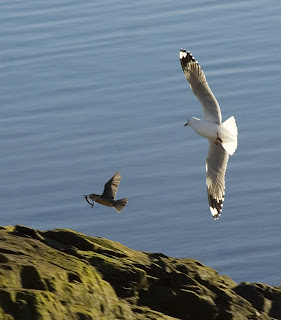 photographing kingfishers. I like to try and snap them as dive for crabs and the odd fish. One kingfisher spotted a big worm on the bank, swooped down and caught it then flew back to his perch on the railing. A seagull spied him there with his big fat worm lunch and decided to steal it for himself... as they do. I caught the action! They disapeared from sight so I don't know who ended up with the prize. Those damn seagulls try to steal food from almost all the birds, I got this shot of a heron getting mugged for a mullet. I don't normally take photos of seagulls, not willingly anyway. You'd be surprised at how many of my photos are ruined by a bloody seagull flying into the middle of my shot! However I did get 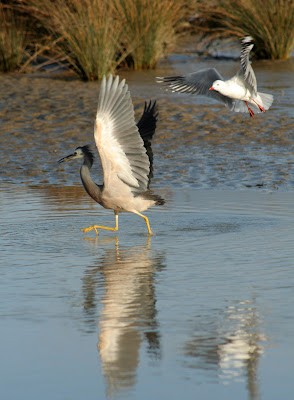 quite a groovy shot of a seagull drinking out of the fountain outside the Auckland City Art Gallery a few months ago. (Yeah I know - out with my camera in the big smoke and all I can find to photograph is a 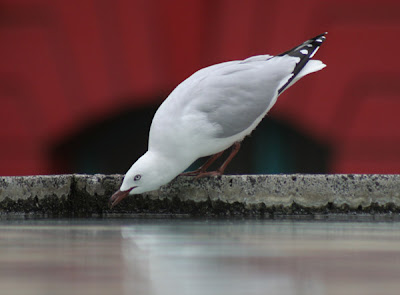 BIRD and a SEAGULL at that! Obsessive!)
Posted by Mandy at 03:42 No comments:

Of Bitterns, Botulism and a Birthday 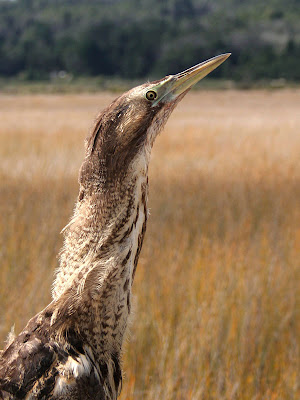 In Mid-April I got a call from Rosemary Tully at Whakatane Bird Rescue to say she had a bittern that she had rehabilitated and was ready for release at the Nukuhau Saltmarsh. A small crowd of people turned up to watch. Margaret and Stuart Slade told me of a large bittern that they often see there so we all hoped the two would perhaps meet up at a later date and make some little bitterns. The view from the end of the boardwalk out over the marsh was beautiful, the perfect spot for the release. Rosemary plucked a couple of feathers from the bird for Dept. of Conservations DNA records then set it down on the platform where it went into "Stick" mode, doing its best to impersonate a stick. This is when I took heaps of photos so the bittern came to the conclusion that it was fooling no-one and decided to split. It flew a short way before disapearing into the reeds. A happy conclusion for all! 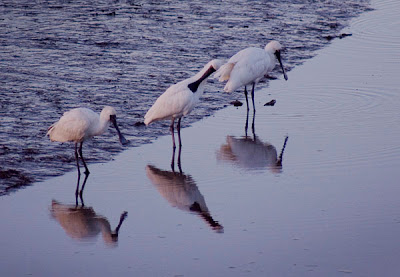 MAY 2008, I have been visiting the Apanui mudflats almost every morning hoping to see the Kotuku. They breed in Okarito in Westland in the South Island over the spring/summer then disperse to spots all around the country in the winter. The spoonbills have been back for a while, I've seen up to five in this spot lately. They make lovely subjects & I've got some nice shots. But they are a bit goofy in comparison to the kotuku.

I arrived at the mudflats one morning at low tide and was checking out the action looking for something to photograph. I walked out onto the mud & saw a large flock of Black-backed gulls which was unusual. I normally see a few individuals but not in large numbers. As I approached the gulls a few let me get very close. It became apparent that three of them so sick that they were unable to walk or fly which put me in a bit of a predicament. I am not a fan of these birds as they prey on the chicks of other birds (dotterels for one.) BUT I couldn't walk away and leave them to die slowly in the sun. After a call to Mike Jones at DOC I found out they were probably suffering from Avian Botulism and there was no chance of recovery. Mike was busy with a kiwi release and most of the other staff were at a funeral which left ME to deal with the situation. Quite by chance I had a large plastic bin in the back of 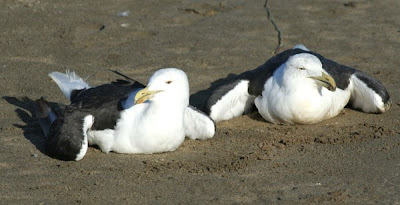 the car so I gingerly picked up the gulls and put them in it. I was surprised at how light they were for such a large bird. They put up no fight. I took them to the "Vets for Pets" clinic in McAlister St and explained the situation to the receptionist who assured me the vet would deal to them as soon as she was finished with her current patient. A lady with a poodle came over to peer into my Box of Birds. "Aaaah" she cooed and went to pat one....Duh! It latched onto her hand in one final defiant gesture..... I tried not to laugh.

My Dad turned 72 on the 24th May and Troy and I took him and Mum to Rotorua to visit Wingspan. My sister Gina and her daughters Nicky and Melissa met us there also. We were treated to the usual stunning flying demos by NZ falcons Ozzie and 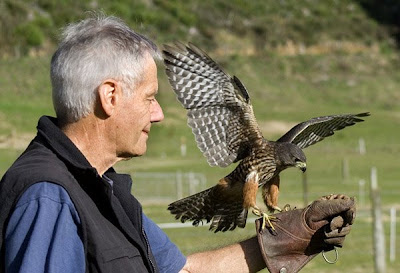 Ruby and everyone had the chance to have them land on their (gloved) hand. My nieces were especially impressed as was the Birthday Boy! Ten year old Nicky fell in love with "Whisper" the Morepork and asked her Mum if she could get an owl of her own. Gina told her that you can't buy owls but Nicola insisted she would be able to find one on TradeMe. We all had a wonderful afternoon & Dad said it was the BEST Birthday! 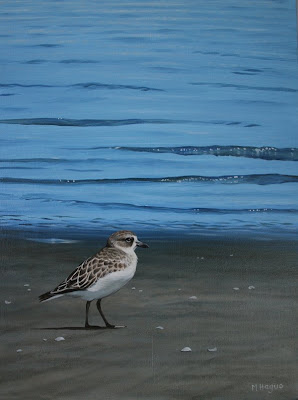 Here's one of my latest paintings. Its a dotterel in winter plumage. I had only just finished it when it sold two days later. I felt sorry to see it go as I hadn't finished looking at it which sounds a bit strange but I'm like that with my paintings. I like to look at them for a while to make sure there is nothing that I want to change. It went to a good home so thats good.
These little birds are much more colourful in their breeding plumage when the chest is a lovely rust colour.

Monday 9th JUNE.
HE'S BACK! The Kotuku I mean. I saw him briefly on Friday afternoon but the light was too dim to photograph him. Then this morning I was at the mudflats when he soared past and landed on the Yacht Club railings. He 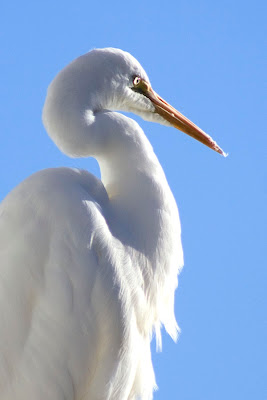 was in the shade so I got a couple of photos then went to warm my frozen fingers on the sunny side of the building. He flew up river to the little creek behind the skate bowl and I got some nice photos but he was a little far away. He couldn't find much to eat so he flew back to the sunny side of the yacht club where I got some great shots of him preening. I was hoping he might fly down to the rocky point to catch mullet but Troy phoned for me to take him home as he has a nasty cold. BUGGER! Oh well, theres always tomorrow!
Posted by Mandy at 00:52 No comments: