One georgous morning early last week I couldn't help but stop off along the riverbank on the way to my studio. Strangely there were no whitebaiters but this Pied Shag was having a successful morning capturing a tasty looking flounder (or perhaps a sole? not really up with fish names.) 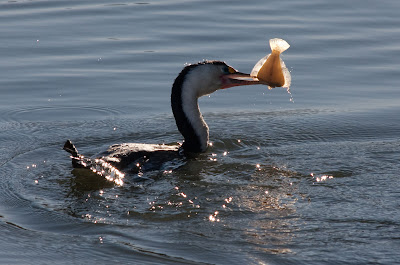 You can almost see an expression of complete surprise on the "face" of the flounder...do flounder have faces? But now I'm just being anthropomorphic which is not a trait I'm normally prone to. 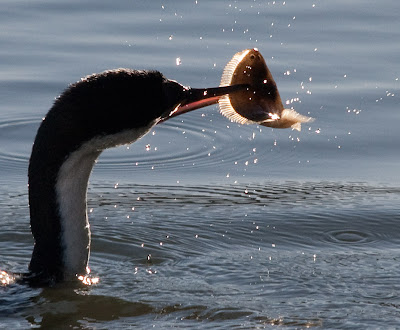 There are 12 species of shags that breed in New Zealand. Below is the little black shag, not to be confused with the black shag which is...well...bigger. I love their emerald coloured eyes, strangely like the colour of the water they inhabit around the wharves on a sunny day. I took this photo on Friday morning at the Whakatane Wharf. 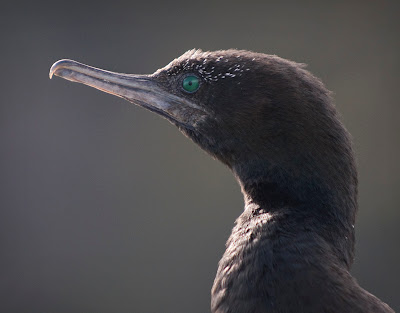 I spent the long weekend with family in Tauranga and on Saturday had a walk around the Mount. At the harbour entrance we paused to take in the view. A short way back along the track was a bench seat which some tourists were making good use of. Unbeknown to them there was a large colony of shags nesting in the pohutukawas above them. It wasn't long before the tourists were doused in a rather foul smelling spattering of guano (bird shit) & obviously they were not impressed. I had to wonder why they didn't notice the surrounding ground was white with shag poos, surely that would ring alarm bells? This begs the question - did someone at the Tauranga Council in the parks division have a sick sense of humour when deciding where to position the park benches? Heh heh heh. 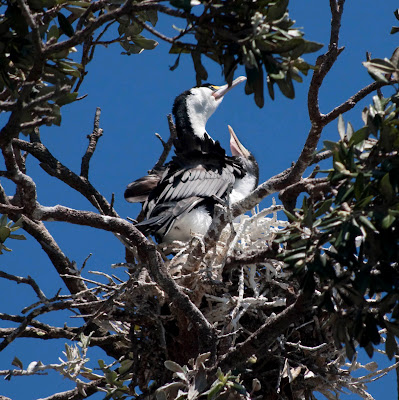 Below is a pic I took last summer. There were thousands of little fish at the Whakatane wharf and this shag was one of a number that were chasing large shoals of them up the boat ramp. The shag would snap them up as they leapt out of the water to escape from it. I really like this photo as you can see a couple of the fish have landed on the shags back but fortunately for them he already has one in his mouth. 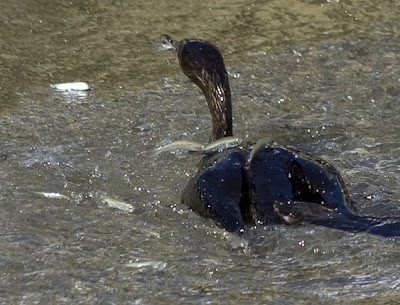 Hey Wow, four posts in five days. I can't be working hard enough. I needed a bit of a break after my exhibition which was...well..a little disapointing in terms of sales. Thats what you get for exhibiting during the school holidays. People are too busy spending money on their children rather than on deep and meaningful paintings that match so well with the curtains. Sigh. Where are their priorities? Hard not to take it personally but I'm sure the prices will go through the roof when I'm dead so thats encouraging....uh... I think? Hey at least I'm not short of Christmas presents for the family. 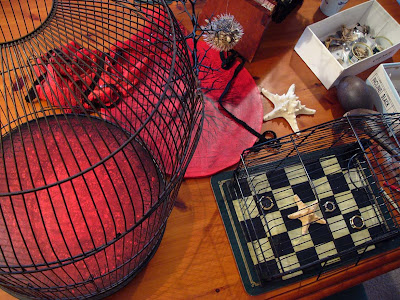 They say a change is as good as a break so I'm working (& I use the term loosely) on some sculptures that I plan to exhibit at the Summer Arts Festival in January 2010. Troy and I have both been invited as guest exhibitors. He's working on a fab photo series for it that have just blown me away but I'm sworn to secrecy. And I'm not going to put any pics of my finished sculptures on here yet but these are some snapshots of the works in progress. This is what I've been doing today which has involved lots of spraypainting of the cage structures themselves. As its raining I've had to do them in the garage which I've discovered does NOT constitute a well- ventilated area as specified on the instructions for use. Don't blame me if there are spelling or gramma mistakes, its the fumes I tell ya! I've killed enough brain cells with alcohol over my adult life to waste whats left on paint fumes. Unfortunately no-one told me until quite recently that if you kill brain cells they DON'T grow back!!! Aaaaaaaarrrrrggghhh! 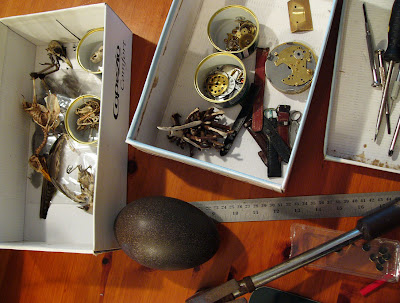 I feel quite liberated doing these sculptures because I can do them simply for the enjoyment of creating them without having to worry if anyone else is going to like them or not. Unfortunately I have to compromise my paintings sometimes because if I don't sell any I'm screwed. So the sculptures may even reflect a bit more of my gothic tendancies with just a little steampunk thrown in for good measure. Its been a revelation to discover there is a word for those kind of leanings - steampunk. Which means I'm not the only one who likes that kinda stuff. Quite reassuring really. I must look it up to see the proper definition...now I'm rambling...blame the spray paint! 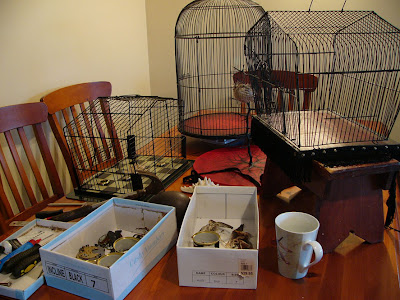 I guess we won't be eating off the dining room table tonight.
Posted by Mandy at 21:01 3 comments:

"As you sow, so shall you reap." Well so far the slugs have eaten my beans, the birds have eaten my basil seedlings and Billy the Wonder Dog has trampled half my spinach plants on his quest to save the universe from the threat of the common bumblebee. The silly dog launches himself into the air and snaps at any bumble bee flying past despite already having been stung once and having a reaction that swole one side of his face to twice the size. So I'll be lucky to reap half of what I've sown this spring, thank God for New World. 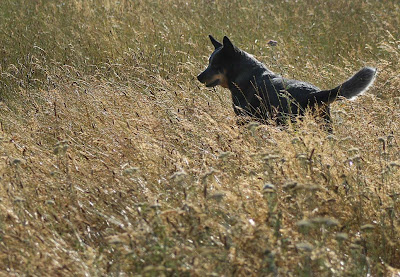 I visited Sullivans Lake in Kopeopeo today to check out the goings on among the local birdlife. The lake edge was teeming with resident cats ogling the ducklings and the huge population of dreaded Koi Carp waving their orange tails from amidst the lilypads. There were a number of Coot nests in varying stages of development. This ones eggs were getting wet, she was trying to build the nest up around them with reeds that her mate was bringing her. 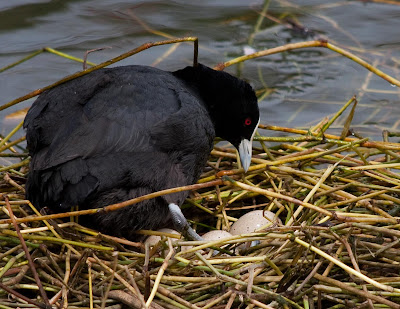 I'm always intrugued by these coot (not cute) babies. How can something this zany grow up to look like the adult coot? The chicks look more like muppets that failed the audition. But its lovely to watch both parents take such care to feed them and fiercely guard them from any other birds that get too close. One little guy had already lost half a wing to a predator I noticed. 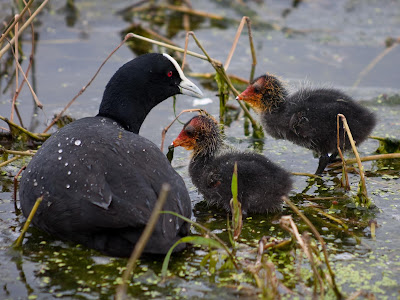 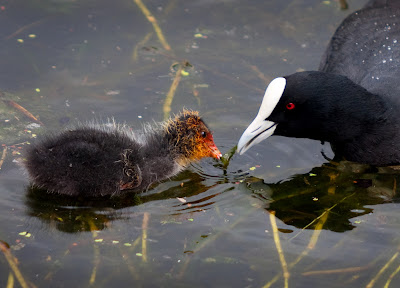 Email ThisBlogThis!Share to TwitterShare to FacebookShare to Pinterest
Labels: nesting coots and chicks 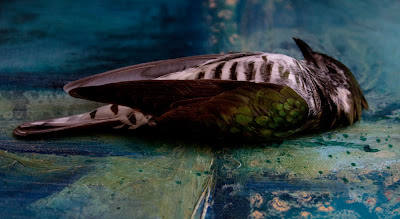 Yesterday I visited a friend who lives on the eastern side of the Ohiwa Harbour. Her neighbour had a shining cuckoo hit the window and my friend saved its body for me in her freezer. It was the most stunning little creature about the size of a sparrow but finer built. The species gets its the "shining" part of its name from the superb iridescence of the green plumage on its back, wings and the striking bands on its underside. It lays its egg in the nest of another bird in true cuckoo fashion. 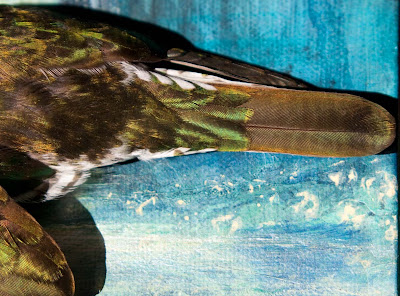 They neither build the nest nor rear the chick, thats left up to the grey warbler who by now has already reared a brood of its own.Can you believe this species of little bird spends each winter in the Solomon Islands and flies all the way to New Zealand every September to breed. I can't tell you how far that is but for such a dainty little thing it's a pretty impressive feat! 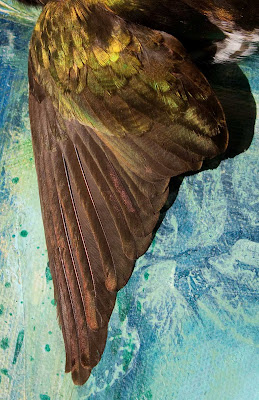 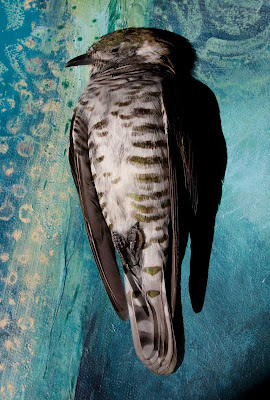 I was in the garden last weekend and Troy came to find me saying "I've found something I think you'll really like." He is well aware of my penchant for the macabre but even I had to admit his find was pretty gruesome! It was a rat that had died inside the cabinet in our carport and had become mummified. I have no idea how long it had been there but it was totally dried although not entirely odourless. 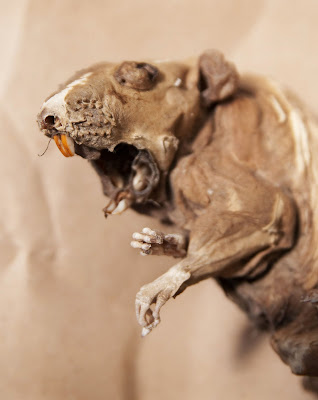 Troy took the following photo and played around with it in photoshop....I'm thinking it has possibilities to market as a postcard....yeah...nah? I ended up trading the rat to my Mum for a small display cabinet in which to house my skull collection. OMG we sound like the Adams Family!!!! 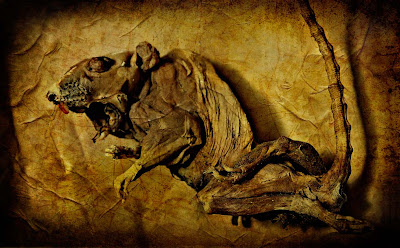 I have no idea how its right leg ended up on its left side.

On a lighter note, we went to Bunnings on Sunday to get some stuff for my new sculpture projects (yes I'm branching out.) I had noticed while driving home over the last few weeks that a pair of Spur-Winged Plovers had permanently moved into the grassy area between Bunnings carpark and the State Highway that ends at the Whakatane Bridge. I suspected they were nesting so after buying some MDF and brass upholsterers tacks I sussed out the birds. Sure enough they had three fluffy little babies. In all honesty both the parents and the chicks are kinda freaky looking. Whats with the yellow goggles I wonder not to mention the pointed spurs on the wing joints of the parent birds. Unfortunately not visible in my photo. Freaky chicks but admittedly kind of cute nevertheless. 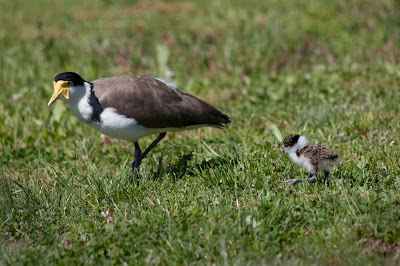 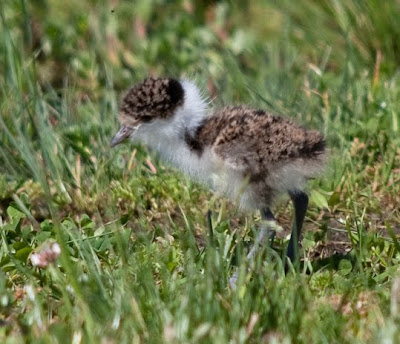 After a successful exhibition opening last week in Tauranga I was looking forward to a bit of a relaxing week spending time with the family. My two nieces Nicola and Melissa were spending a week with Mum & Dad so I caught a ride back to Whakatane with them. At the roundabout near BayPark we caught up with ex Kawerau artist Owen Dippie and I took these shots of his Street Art with Nicolas camera. (Thats Nicky in the pink tee.) 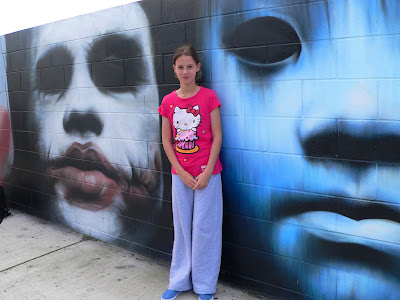 Driving to Tauranga I've often admired the Joker, a painted tribute to Heath Ledger which is now joined by a graphic from "The Grudge" and in progress "Chuckie."
Awesome work Owen! 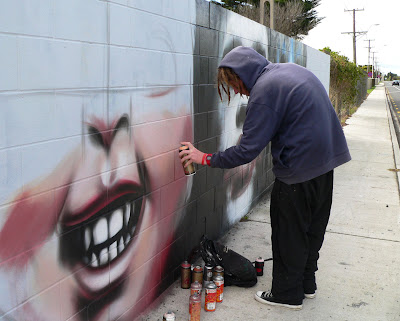 I was at the end of White Horse Drive recently taking pics of the pooks there - they are so tame cos I suspect the local residents feed them. The little buggers accost you as you get out of your car until they see you aren't there to give them a handout then they lose interest and head back to the murky little pond at the start of the birdwalk. One was talking a bath while another two preened each other. I'm lovin this new camera! 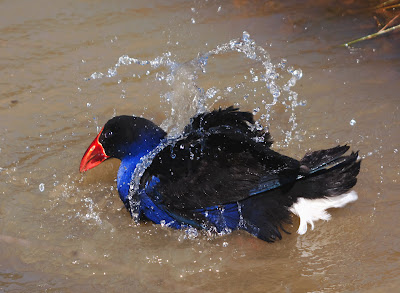 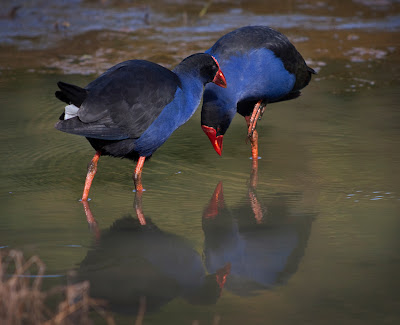