Happy New Year everyone! Huge apologies for being absent for the last three months, it was not something I had planned - it just worked out that way as I concentrated on other projects, plans and personal avenues in my life. I have recently been given a bit of stick about the lack of posts so I've been pleasantly surprised at how many people actually read them which is quite lovely! So here I go trying to catch up on the last three months... a deep breath as I cast my mind back to October. Gosh it HAS been ages.
I had joined the NZ Geographic group on Flickr, ( a photo sharing site http://www.flickr.com/ ) and was surfing the discussion board late one night when I found an opportunity too good to miss. Photographers were being offered a trip out on the Gemini Galaxsea at a reduced rate to see Blue Whales that were visiting the Tauranga coast. The voyage was departing early the next morning so I booked myself in and tried to get some sleep in beforehand. A few hours later I was at the marina meeting Butler who skippers the vessel. It was a georgous day, conditions were perfect and I was thus sceptical that we would be lucky enough to see whales and have lovely weather! A few miles out and I had gone below deck to grab a warmer jersey when the call went up, "whales!" 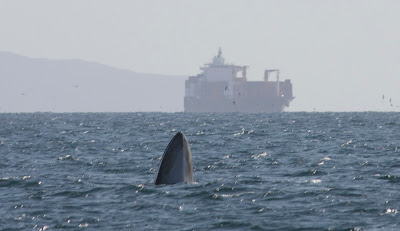 My first glimpse was a gigantic head rearing up out of the ocean quite a distance away. This turned out to be one of a pair of Brydes Whales and before long we were reasonably close. 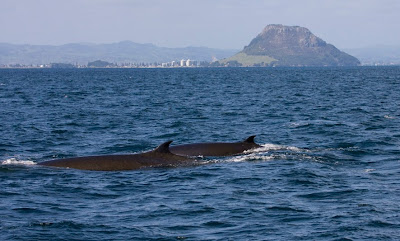 That's Mt Maunganui and the Tauranga coast in the background. According to the NZ Geographic website (who have a great interactive page on Whales found in NZ waters) the Brydes Whales are the only baleen whales that feed locally without migrating to the Arctic and they grow to 14.5 metres long. The shot below captures the moment the whale closes its mouth forcing vast amounts of water through its baleen or filtering system collecting krill and other tiny marine life on which it feeds. Unbelievable to think something so huge survives on creatures so tiny! 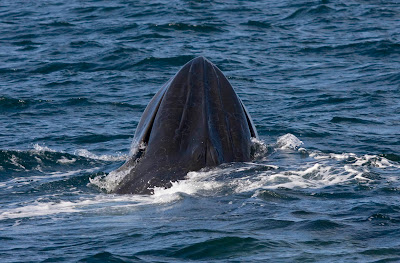 I was so thrilled to see these whales and was amazed at how large they were. Just incredible, I could have gone home then and been happy but the day got even better! About half an hour later we found a Blue Whale, visible from his waterspout on the horizon. I then re-evaluated my concept of large as this leviathon eclipsed every other creature on earth in the size department. Not even the largest dinosaur that ever lived was as big as this baby! I wished my photos gave a better indication of size but during the dayI realised how difficult it is to get great photos of whales. I was fortunate enough to meet NZ's most accomplished photographer of sea mammals Dr Kim Westerskov who happened to be onboard. Kim is a wildlife photographer and freelance journalist and he also happened to be one of the judges in the Biodiversity photo competition I won last year so it was lovely to meet him and see him in action. 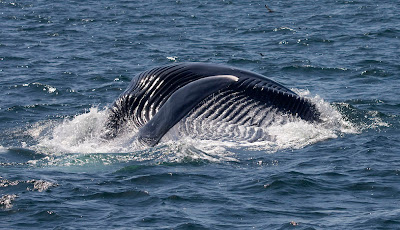 This shot shows the Blue whale filling his baleen full of water his pectoral fin in the air as he feeds on his side and below are his nostrils as he takes a breath! 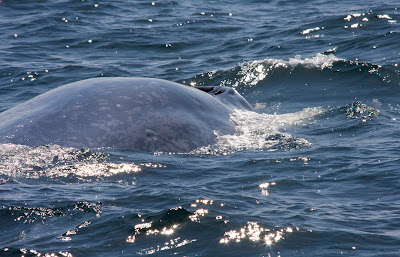 Later we found another Blue Whale and after onserving for a few minutes realised it was not one but two - a mother and calf which was fantastic. The mother was positioning herself between us and her baby so difficult to get a shot with them both in the frame. Due to D.O.C. regulations protecting marine mammals we were alloted a certain amount of time observing each and when we had used up that time there was still plenty to see and do. There were vast flocks of fluttering shearwaters which Butler cruised through while we photographers hung over the bow rail snapping furiously. These delightful birds are adept at walking on water to stay just in front of the boat and proved popular subjects. 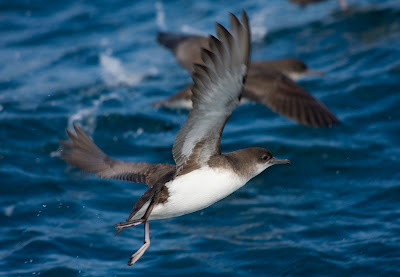 And when we tired of them a quiet cruise around the Karewa Island revealed sunbathing seals and resting shags. 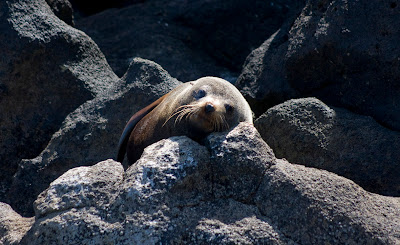 Back on dry land I was just buzzing over what I had seen that day. I had taken hundreds of photos, seen the largest animal that has ever lived, met some great people and seen the ecosystem as it should be (apart from a couple of purse seiners filling their nets.) The oceans appeared to be teeming with life, birds everywhere, it was the perfect day! Thanks to NZ Geographic & Butler of Galaxsea Gemini for the opportunity - it was a day I'll never forget.