Late last week I had been watching vast numbers of european starlings flocking in the skies above the Whakatane River. They circle in great black clouds before landing in their winter roosts in the park. They have chosen a grove of Karo (a type of pittosporum) that grows in a dense covering on a small curving hill. The miniature railway runs around the back and through a tunnel in the middle of the hill and the stepped seating of the amphitheater creates the curved face. These large roosting colonies occur only in winter in the non-breeding season and is a phenomenon seen on a huge scale in parts of europe. (U-tube has plenty of 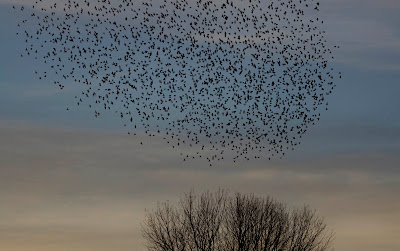 On Thursday I was walking toward the roosting hill as the sun was sinking, clouds of starlings were squabbling over perches when there was a ripple of alarm among them as a falcon came swooping low over the treetops down toward me before turning to disapear around the back of the hill! Awesome! Its been about two years since I had last seen a falcon in this park and unfortunately that bird had come to a sad end. So I was rapt to see another. The light was fast running out but I was definitely going to be back the next night. 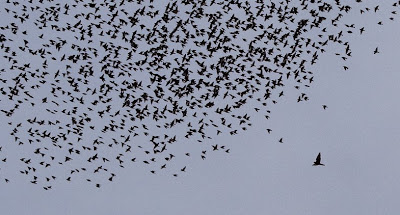 I arrived at the park at about 4.30pm on Friday evening and sat at the top step of the amphitheatre facing toward the setting sun. I'd been there less than a minute when there was the roar of a thousand or so beating wings and a falcon appeared from the tops of the trees to my left and shot just a few feet above my head head to skim above the trees to my right and disapear at a great speed. WOW! A few seconds later and the bird returned and zoomed off back to where he'd come from. Again his flight was marked by a roar of wingbeats from the frightened starlings. What a buzz! 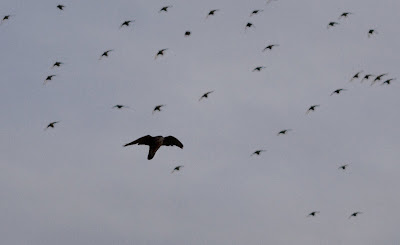 It was a lovely evening and I was content to watch swarms of starlings wash in to land around me in a deafening mix of chirping and wingbeats. One of the flocks I noticed appeared to be flying in a much tighter group forming a dense black cloud over the river. As they got closer I realised they were being chased by a larger bird. I assumed it was a harrier as they were so high up 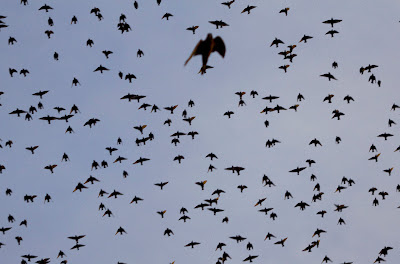 but as they got closer the larger bird disapeared amongst the starlings then all of a sudden it dived straight down at incredible speed then levelled off to zoom toward me. It was of course the falcon and suddenly I had hundreds of starlings flying toward me, I'm desperately trying to get my camera to focus on the bird of prey while my viewfinder registers something like the view from the bridge when the starship enterprise hits warp speed! Whew! And a few moments later the birds have all found their perches for the night (although still squawking loudly about it) the falcon has gone and the 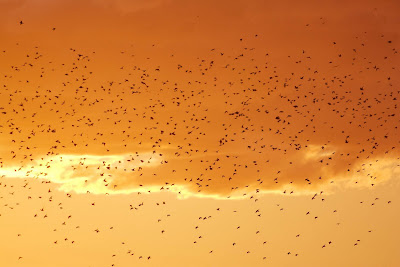 sky is lit up a most amazing shade of red and orange. The best show in town and all for free! Haven't been back over the three day weekend but at 4.30pm tomorrow night you know where I'll be..... 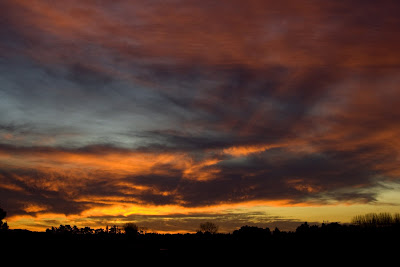 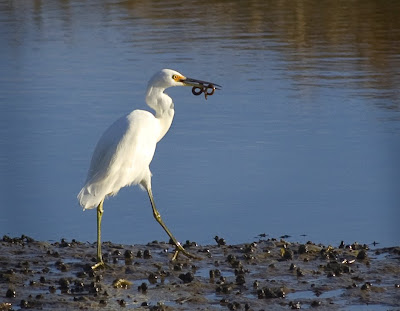 I'm still waiting for the Kotuku to 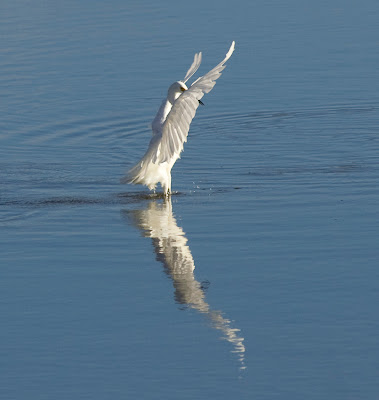 return to the river. The large white bird that flew over the saltmarsh last week (which I hoped was kotuku but suspected was an egret) was back feeding one morning. Sure enough, he was quite small and had a dark beak - an egret. Just as lovely as kotuku although not as impressive in size and unfortunately much harder to photograph as he is very shy! To get these photos I waited until he had caught himself a nice fat little eel and was distracted by trying to swallow the slippery wriggling meal which is not easy if you are a bird. With his attention on breakfast I snuck down the bank behind some rushes and shot this 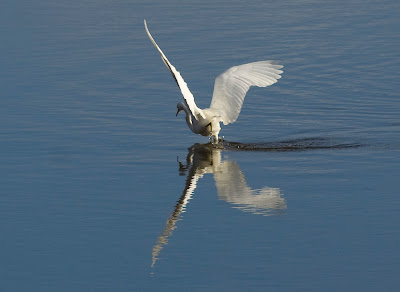 series of photos as he resumed feeding. The egret has a style of fishing all of its own and is quite entertaining as he flaps about actively chasing fish as opposed to the herons preferred silent stalk approach. The whitefaced herons will use a similar technique to the egrets at times but are usually more regal and dignified in their methods. 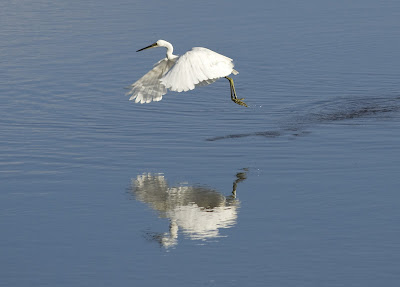 On Wednesday I arrived at the river to a most lovely morning, still and calm, sunny but cold. Perfect conditions for photos but there didn't seem to be any interesting birds around at all. Plenty of ducks taking refuge from hunters but I resist shooting (with my camera) both ducks and seagulls as much as I can. 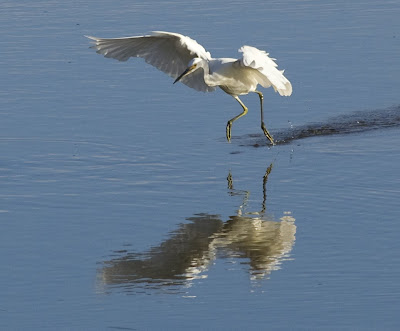 Call it avian snobbery but you can take the best shot in the world of a duck or seagull but at the end of the day they are still just a duck or seagull if you get my drift!!!! ALTHOUGH I did weaken and shoot this photo of a pair of mallards with the excuse that it is a shot just as much about the water and lovely reflections as it is the ducks.
This pair were photographed just behind the skate bowl. 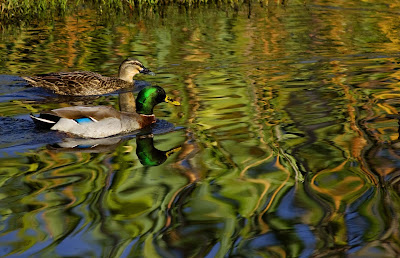 I decided to give up for the day and get to my studio and my painting so headed back to the yacht club where I had parked the car. As I was walking along the stopbank a whitefaced heron flew in from upriver and landed on the flats. Immediately another bird flew in from the rocky point to my right croaking angrily.

In the time I have been 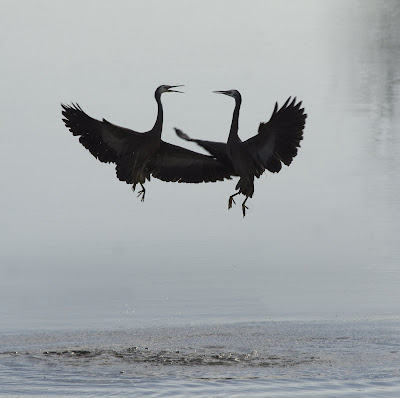 photographing these birds I won't go so far as to say I recognise each individually but I have come to know of a few by their habits. There are three or four birds who favour this feeding ground, two are a pair although they don't always feed together. Another is a single male who often challenges the male of the pair and two or three times I have witnessed arial battles between them. Unfortunately I have always been too far away to photograph them scrapping but it appeared that this morning I was finally able to get the opportunity. The heron from upriver was the single male, the one from the point one of a pair. 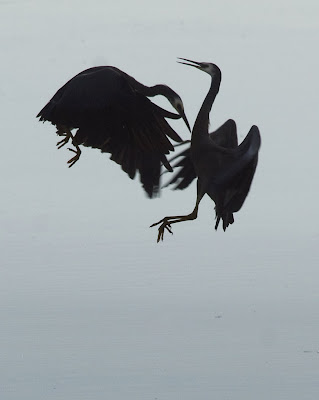 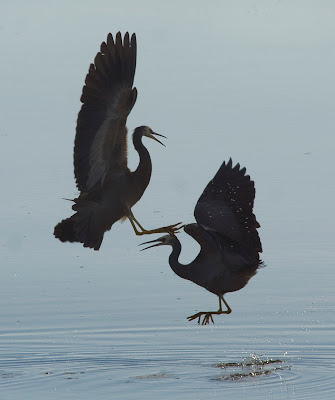 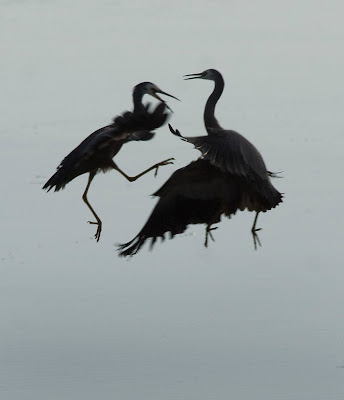 Battles usually start with body posturing, Both birds drop their wings a little and the long thin feathers on their backs stand semi-erect. They hold their heads up as high as they can, all this posturing in an effort to appear bigger than they truly are. They strut side on to each other for a bit then turn and show their other side as they strut back again like yachts tacking in a race. If neither side backs down then they get closer and closer before finally turning to face each other in a challenge to duel. These two didn't waste much time posturing before they were hard out fighting! Unfortunately I didnt have time to get closer and I was shooting into the sun so my photos arent the best quality but they capture some of the action. There were literally feathers flying 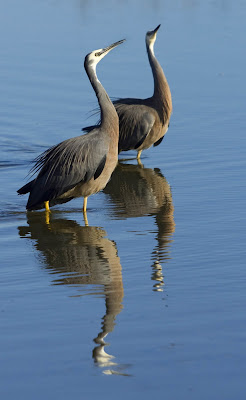 although they didn't show up in my images.
After a battle of about five or six seconds the male from the point beat a hasty retreat back to where he had come from, near where my car was parked. I followed and very soon he flew back to again challenge his attacker. I was able to get myself close and in the perfect position to capture another fight, this time with the sun at my back. BUT those bloody birds just did their sailboat impressions cruising up and down with their beaks pointed at the sky for about half an hour!!!! The loser from the first encounter was just not quite game enough to engage in combat and would back off as soon as the first one got too close. Finally he was distracted by a fish flopping about in the water so he grabbed that and used it as an excuse to walk away from the fight.
While the herons use this posture of "heads up as high as they can" to signal aggression, the opposite is used to signal a friendly greeting. The heron pair, after a morning feeding often rest together on the balcony of the yachtclub and when they meet there it is with heads lowered and beaks clapping at the other birds knee height. They croak softly to each other and the feathers on their backs are raised. The sexes are difficult to tell apart unless they are together with the male slightly larger and a little more colour in his plumage. 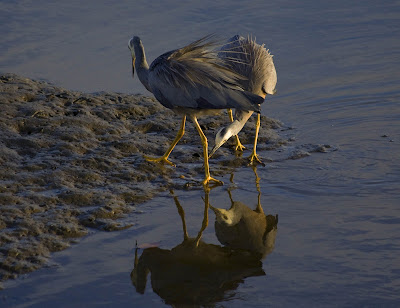 About a reptile, a rodent and a range of birds

Troy and I had Friday off and we spent the day at home catching up on jobs. It was lovely and sunny and the skink was back in the carport. Troy got this great shot of him. He really likes hanging out in our shoes! 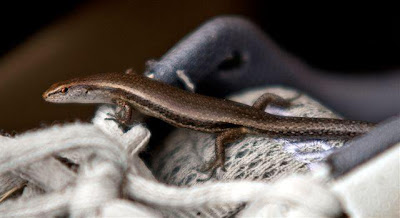 I was hanging out the washing when I saw Billy the wonderdog sniffing around in the garden. All of a sudden he went into "hunt" mode, his tail stuck straight up and his body was stiff. He was staring into the greenery behind the carport. I thought he may have sniffed out a mouse so I told him to "get dat mouse boy!" All of a sudden he lunged in and came up with a HUGE rat in his mouth!!! Aaaargghhh!!!! He shook it and the rat turned and sunk its teeth into Bills cheek. The poor dog spat out the rat but it was still hanging off his face. The rat was squealing, I was squealing.....After violently shaking his head a number of times the rat let go and tried to make its escape. Bill jumped on it again and finally killed it. I made a fuss of him and gave him two big bones as a reward. He was bleeding a little from a bite mark on his muzzle but 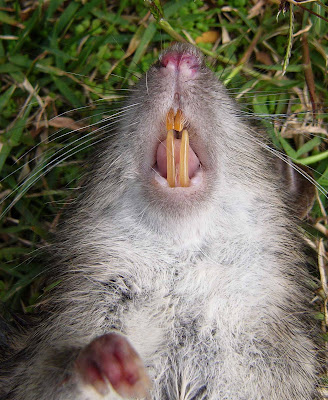 he soon forgot his injury after he got his bones! So check out these nasty teeth.


I have been waiting for the return of the Kotuku at the Apanui saltmarsh recently and I thought I had spotted him there last week. But I only saw him flying over into the reeds and when I later checked the photos I wasn't convinced it was the white heron. Instead I think it was the egret whom I have seen feeding at the Awatapu lagoon lately. But I did take some shots of the spoonbills. A pair was circling over head, spooked into the air by a harrier, and I took this photo as they began their descent. They very suddenly half fold in 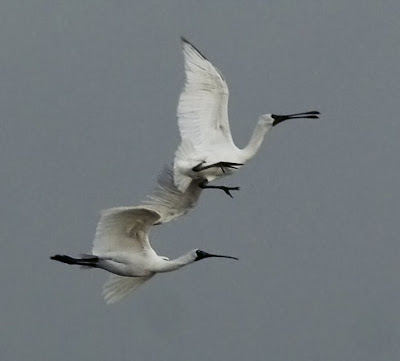 their wings and almost tumble to the ground in a spectacular fashion before regaining composure just before landing. Goofy birds but very interesting to watc 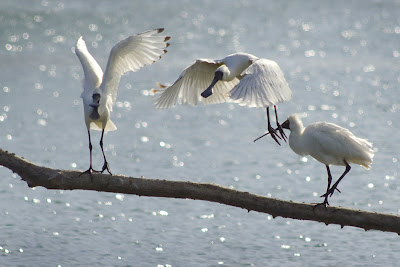 
On Sunday I went for a walk along Thornton beach. There was some spectacular breakers rolling in from way out in the ocean. There was a divine golden sunset and I photographed a couple of stilts in the orange light. 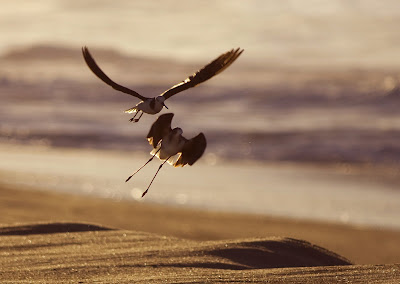 Today Troy had to work late so I was lucky enough to watch the sun set over my favourite spot on the river. It was a still evening and the starlings were flying in large flocks over the saltmarsh before retiring to their roosts. I can't help but think how lucky I am to live in such a wonderful place! 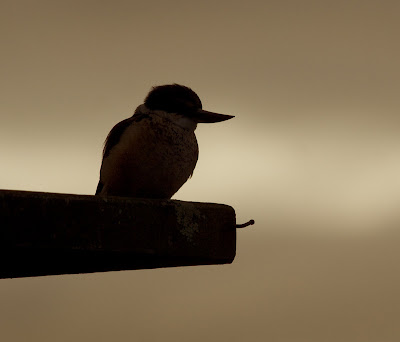 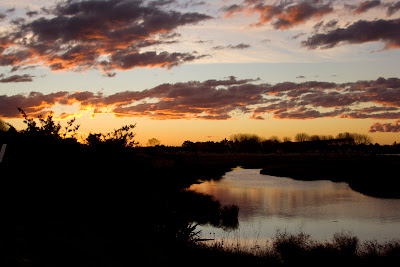