Had no time for a blog this week as we are moving house... YAY! Only half a kilometre up the road but an awesome place to live, large rural section with tall trees, lots of garden and a massive lawn for Troy to mow. Hee hee. AND we are off on five days holiday down Wellington way. Going to stop off at Mt Bruce wildlife centre which I'm really looking forward to. Photos coming soon!
Posted by Mandy at 10:23 No comments: 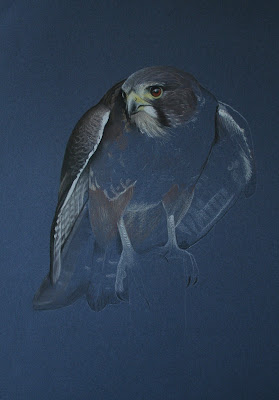 Greetings! Wow there really are people out there that read this! Thanks to the artist from Gisborne who sent me a message after the Rosegarden falcon died. I have just given up trying to work out how to reply to her in person because this site won't pass her email on to me. Or maybe I'm just too dumb to work it out.


I have just started a drawing of "42" one of the female falcons at Wingspan Rotorua.


I am using pastel pencils and it will be a slow process as it takes many layers to get the end result. (In this case the term pastel refers to an artists medium of coloured chalk and not soft colours like pinks and lemons.) Pastels more usually come in solid sticks like crayons but I like the pencil variety as you can get good detail. They do smudge easily though.

On Monday I joined a small group of "bird people" to help clean up the Apanui Saltmarsh by the Whakatane Yacht Club. We collected numerous bags of rubbish, a car wheel and a rusted shopping trolley! The saltmarsh is used by a very large number of bird species and it just behind our main shopping centre which is very handy. I often stop off there on the way to my studio in the mornings especially in the winter as we had a resident Kotuku and three spoonbills there. When the kotuku was elsewhere I would often photograph kingfishers from the yacht club balcony. When the tide and light were right I could get some great shots as they hovered for a second or two before diving down to catch a crab or small fish. They would hit the water with a loud "smack" before flying off with their prize if their aim was any good. I painted one at rest in a willow from a photo I took on the edge of Ohiwa Harbour recently. One day I'll paint one diving or flying off with a fish. I haven't spent any time at the yacht club since whitebaite season opened really as there always seems to be someone sitting on the point with a net. 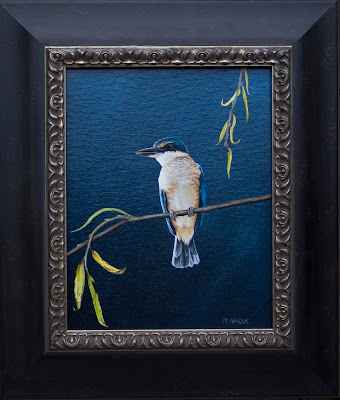 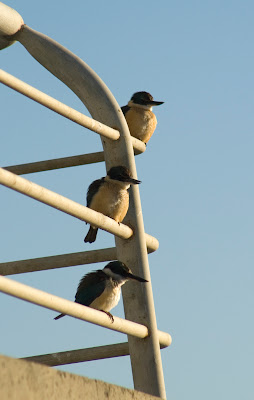 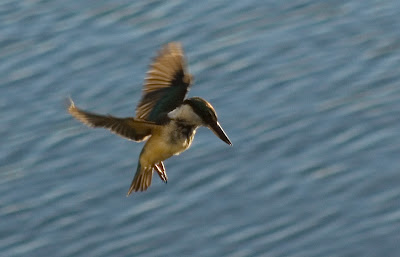 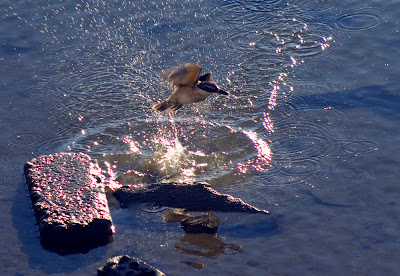 
Our Exhibition opened on Thursday night. I spent all afternoon in the kitchen 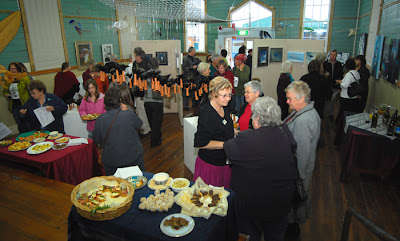 making crostinis and nibbly things. The night before my 10 year old niece and I made cheese pastry and she cut duck shaped biscuits out and Voila! Cheese ducks! We went down to the art centre to set up about an hour before and I started to get nervous that no-one would turn up. BUT fifteen minutes later the place was packed! And we began to make sales. I was so pleased because we are donating a percentage of sales to Rosemary Tully at Whakatane Bird Rescue for the building of some new aviaries. Oh, and also I can pay my rent! We had such a fantastic evening and we have had steady sales every day s 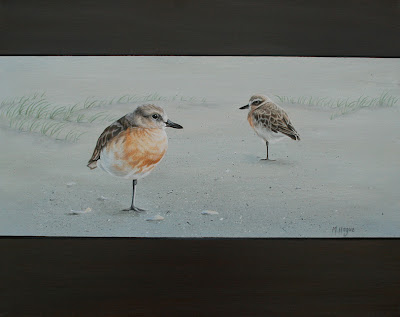 ince with another six days to go.

This is the last painting I did for the exhibition of a pair of dotterels.

About mid-day today we decided at the last minute to visit Wingspan Raptor centre in Rotorua where we joined up. Our yearly membership gives us free 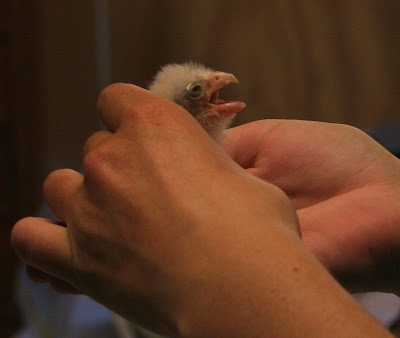 entry which is great value. We were extremely spoiled and given V.I.P. treatment - allowed in the nursery to see two newly hatched falcon chicks less
than two days old! We watched
Debbie and another lady feed them tiny pieces of meat, mimicking the parents noise to encourage them to open their mouths for food. Not that they really needed encouraging, one in particular was fair squealing for his lunch! There was also one more egg in the incubator waiting to hatch. Its wonderful to see these birds in such good hands.

At two pm the flying display started with "Aussie" a male falcon putting on a great arial display that included high speed diving and sumersaults while chasing a lure. Then I got to put on a leather glove and Debbie placed some food on it. Aussie flew in and landed and I got to see him up close and personal! That was such a buzz! Next up was 42, named after the the meaning of life in "Hitch-hikers guide to the Galaxy." She was a large female with pristine plumage and again I was priveledged enough to have her land on me. Troy held her also after she landed on his head at one stage!
We both got some great photos, I really must paint one or perhaps they might make a good pastel drawing. All in all it was a brilliant day and I'll look forward to following the progress of the new babies. 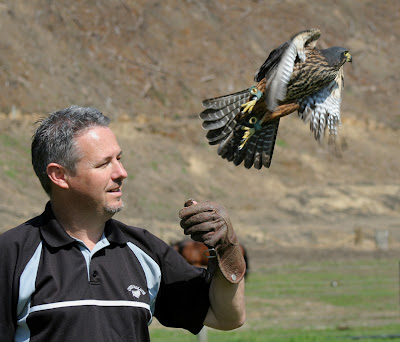 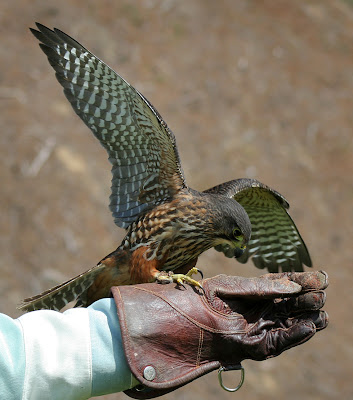 I can't believe its been so long since my last blog! I have been so incredibly busy organising the BIRDSaPLENTY Exhibition that I've hardly had a minute to spare. I went over to Opotiki on Tuesday to set up and it took about 7 of us from 11 til 4 to get done. But I was SO STOKED when we finished. It looked awesome!

I stayed at Mum and Dads on Wednesday night and got up at six to see if I could catch up with the Kaka at the old Opotiki hospital as I'd had a tip off from Liane at the two fish cafe that they were hanging out there in the mornings. I got there as the sun was coming up and contrary to the weather forecast it was a clear-as day. A bit frosty but the sky was orange and glowing. I didn't want to appear suspicious so I walked purposefully from one entrance along the road to the other entrance. It was a spooky place, more like a haunted asylum than a hospital. It has been abandoned for a few years now and all the windows have fallen victim to vandals and had been smashed. There were a number of Kowhai along the road frontage and I'd seen some photos of them feeding in kowhai in the Opotiki area so thats where I expected to see them if at all. Liane had said I would hear them before I saw them but in the cold stillness of the morning if occurred to me that I really didn't know what noise they made. But I was reasonably confident I'd know if I heard it for some reason.

I was told to expect them at 6:30 - 7am but by 7 I still hadn't seen them. Lots of birdsong, thrushes,blackbirds, magpies etc. There were houses next to the hospital grounds and lots of NO TRESSPASSING signs. After walking to and fro and to and fro I was almost thinking of giving up when I saw a dark shape in a kowhai. A Kaka! I slipped through a hole in the hedge and started getting photos, difficult as it was still quite dark.There were two of them and what amazing birds! In typical parrot fashion they used their feet like hands and chattered away to each other as they fed. I thought they may have been eating the kowhai seeds but it was the flowers they were most interested in. One flew off and the other screamed and chattered away and in the end I counted six in total. I followed them to a ponga where I witnessed one swinging around and around on a branch going upside down and at one stage hanging from his beak only. These would truly have to be the monkeys of the bird world. I got a couple of good s 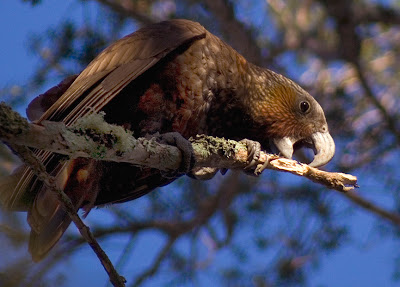 hots before they flew close to a house and when I followed a dog about four inches high came out to bark at me. (It had a six foot bark!) I stooped down and called the dog over where I patted his tummy for a bit. When I thought I'd placated him I stood up to follow the Kaka and he barked louder than ever! The birds and I both left, me to go home for coffee and them... who knows. But I"d got a couple of really good shots!
Well its been a busy week and I really want to tell you all about our exhibition which was really cool but I just can't keep my eyes open any longer. I'll do it tomorrow I promise.....
Posted by Mandy at 00:42 1 comment: