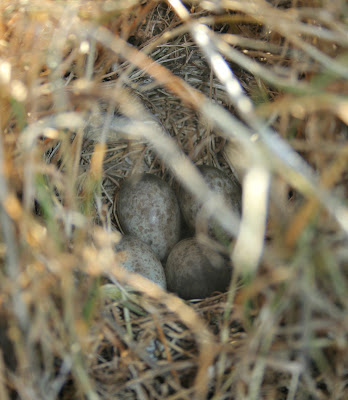 Heres the picture of the Skylarks nest that I had trouble uploading a couple of days ago. Four beautiful eggs in a cup of dried grass. 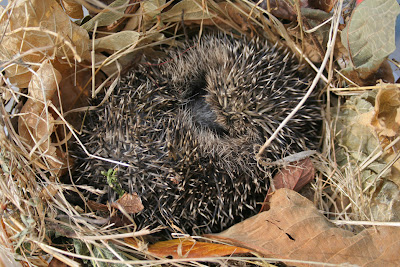 Not long after I'd found the nest I made another discovery. A young hedgehog had fallen into our cattlestop at the front gate. I armed myself with a pair of gardening gloves and lifted him out thinking he'd make a great portrait subject. I lined an ice-cream container with dried leaves and grass and placed him in it on his back still tightly curled into a ball. I put my camera on a tripod and waited for him to uncurl. When he opened up I got some great shots, he looked so cute blinking in the sunlight. 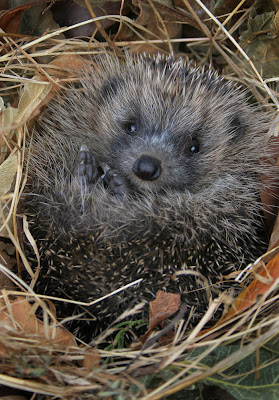 Then I had an uncomfortable thought... hedgehogs are actually a pest, preying on the eggs and young of gound-nesting birds just like the skylarks! So if I am to call myself a true conservationist I must dispose of him. BUT HOW? I could drop him in a bucket of water but that would be far too cruel. Besides I think hedgehogs can swim. I could take him to the vet and get him euthanised but that would be too expensive and I'd feel pretty stupid sitting in the waiting room. I could shoot him with a shotgun but that would be far too messy. (Images of jam and toothpicks spring to mind.) I had to come up with another option so I put the hedgehog on the ground and went inside to have a coffee and think about it. When I went back after my coffee lo and behold, the hedgehog was gone!

About a few days later I went back to the skylarks nest and there were two chicks, beautifully camouflaged with feathers that looked like dried grass growing out of their heads. I wondered what happened to the other two eggs...hedgehog omelettes perhaps? 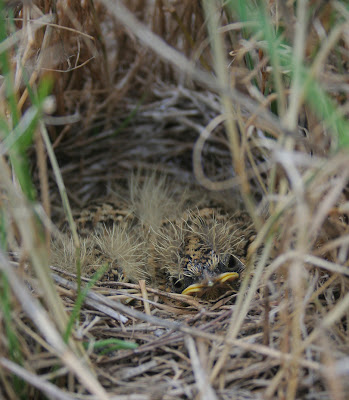 
HAPPY NEW YEAR and sorry for not updating over the xmas period. Lots of other commitments during that time. Also I've just finished co-ordinating the Molly Morpeth Canaday Art Awards which was a HUGE job! Trying to organise nearly two hundred artists made me realise what a disorganised, emotional, fickle, and sometimes demanding bunch of people we really are. Yes its a generalisation and no they are not all like that & its quite UN-politically correct of me to lump them all in together but being one myself I feel quite qualified to comment.

So my New Years resolution (apart from the usual "drop ten kilos") is to include more of my artwork on here as I have labelled my blog "Art and Photos". More later. The 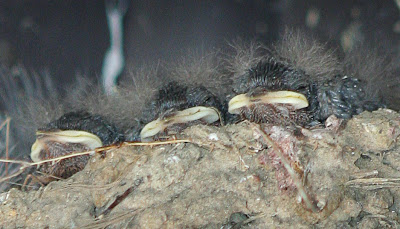 news around here is that the swallows in the carport have just fledged their second brood, four babies this time. I watched the parents chase a hawk off tonight. When they get territorial the little buggers can be quite ruthless and have me running for cover! There was also a family above the door to my studio in town. Three babies raised successfully. The 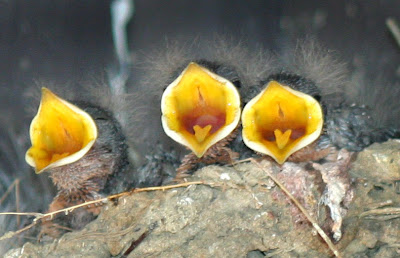 first day they left the nest they alighted just outside my window on the wires across the roof outside and I put my face up against the pane to watch. One of the babies flew towards me and sat on the window frame on the other side of the glass. We eyeballed each other from about six inches away.

We have also had a family of 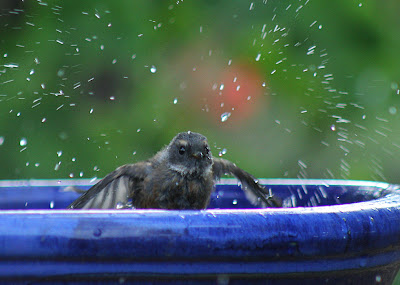 fantails in the garden. For about three weeks the babies would come and use my birdbath every afternoon. And they love to sing in the bath too! The young ones are quite orangey in colour and of course their tails are quite short in c 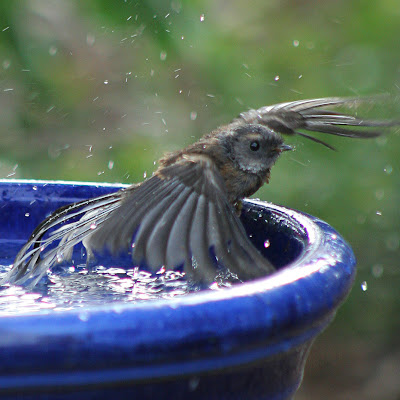 omparison to the adult birds. My Birdbath is simply a large glazed saucer bought from the garden centre, the sort you put under flowerpots and it only cost me $10. I had it sitting on a large upturned pot to start with but it was low enough for Bill the Wonderdog to drink out of so now I have it atop a large Bamboo pole. 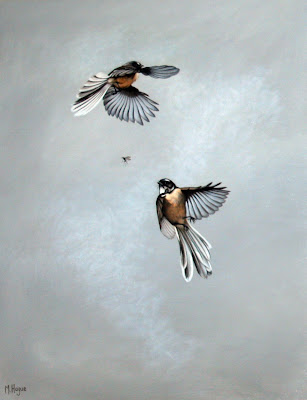 Heres a PAINTING I did late last year of a pair of fantails in flight.

Another family in the neighbourhood at the moment are the skylarks. I was out in the paddock playing frisbee with Bill and I saw a skylark fly up from in the grass. It was a distance away so it took me a little while to find where she had been but sure enough there was the most beautiful little nest. Just a cup shaped hollow in a clump of dried grass with four very camouflaged eggs. I poked a small stick into the fencepost nearest it so that I could find it again and made sure I left it alone. Apart from going back once with my camera the next day of course but I seem to be having trouble uploading the resulting photo at the moment. I guess this will have to wait til tomorrow. I have some photos of an awesome little hedgehog that I'll share with you tomorrow too. Til then, Mandy
Posted by Mandy at 00:46 No comments: