Latest Painting, as yet untitled

When I first began writing this blog I intended it to showcase my paintings and photos but looking back over the last year I realise I have been neglecting the art content. So here is a pic of a painting I have just finished. I am yet to come up with a title, a task I often despair over! 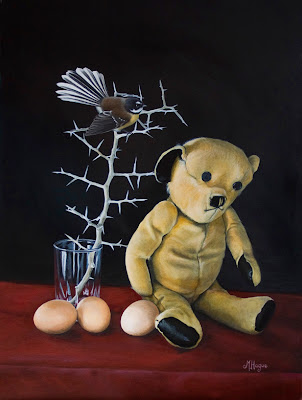 Its kind of a strange image, as usual full of metaphores but heres kind of what it is about. Lets begin with the hens eggs. Commonly eggs symbolise new life (& resurrection but not in this case) and to me they always remind me of childhood. A hard boiled egg for lunch was common when I was four years old. I always rushed to scoop out the entire content with toast soldiers so that I could turn the empty shell upside-down and set it in front of my Dad when he arrived at the table. Perhaps I fooled him the first time but after that he played along, pretending to be surprised when he cracked open his egg to find it empty!
The Teddy was Troys but I had one just the same as a kid. So here it is in my painting to symbolise the happy but distant memories of childhood, well used and worn by the passing of time.I almost always include a bird in my pictures and in this case the fantail was chosen as it is common, instantly recognised and sets the whole theme as something which has its roots firmly in New Zealand. Not to mention it is well-loved which makes it work when juxtaposed with my final two elements -a dead branch of boxthorn set in an empty glass. A reference to reality. How life that was once happy and innocent suddenly contains sharp and nasty thorns! Its about growing up and dealing with the sinister side of life and realisation of mortality. Perhaps this also has parallels with some of the nasty introduced species of flora (& Fauna) which have ravaged the New Zealand landscape and put an end to the image of an unspoiled paradise.
The empty glass is seen commonly in the Vanitas genre of painting literally meaning that life is empty and meaningless in the end. HELL How did I get so depressing!

maybe depressing ideas, but it's so good i thought it was a photo! eggs as potential i can believe

Thanks for that! Eggs as potential...hmm think I can use that in my next painting.
(Finally ironed out an error that was preventing my reply to comments. Sorry it took so long!)

i'm looking forward to the eggs - followed by an omelette!

I didn't notice a delay because i'd wrecked my own mail account ...