Most of my bird photography is done on a small stretch of the Whakatane River above the Yacht Club building, a place called the Apanui Saltmarsh. Its a wonderful spot and the variety of birdlife is constantly surprising me especially considering how close it is to the main shopping centre of Whakatane.

So I spend a bit of time there when the weather, light and tides are right, oh and when there are birds about. (Now and then there aren't any.) Just lately there have been a number of Reef Herons on the river. I have seen at least three different individuals and they are not a bird you generally see often. But this blog is not about Reef Herons. (They will feature in my next blog.) This is about "Honky". 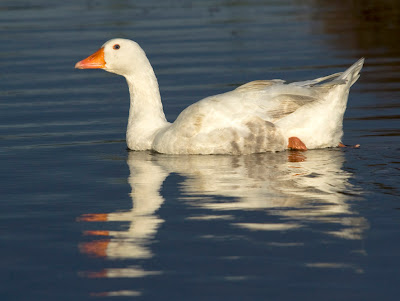 Honky has been a resident of the River here for years and is well known to the locals. He is a big white goose ( actually I'm just assuming his gender, he may be a she for all I know but I suspect he is a gander.) At first impression he appears a benevolent bird, especially cruising along in the early morning light....BUT don't let first impressions fool you. He believes he's the boss of the waterways and at times he is the bane of my life. 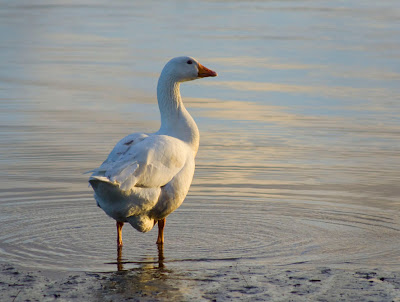 Typically I am in sneak mode, making my way toward a rare photographic subject such as a Reef Heron or the Kotuku, my camera in hand and focusing on my target when, just as I am almost close enough for a decent shot that bloody goose will honk out a warning that would rival any foghorn! All the birds within a mile radius are alerted to my presence and the cocky little bugger swims up and down in front of me, all puffed up with his own importance.

Last week I stopped in first thing and the light was right, the tide was right, there was everything but the birds. I sat myself down on some driftwood to wait and let Honky get that confounded bugling out of his system. There was a shag feeding not far from me and I aimed my camera at him in the hope he would catch himself an eel or flounder. Suddenly Honky decided the shag was encroaching on his territory and flew at him. I was lucky enough to snap an action shot & apart from cropping the tips of his wings off I thought it made a great photo. Paybacks for all those shots you ruined for me you silly old Goose. 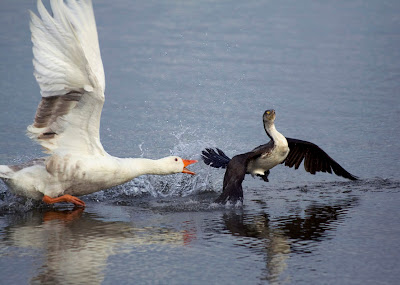 That is very funny, tis a nice shot indeed.