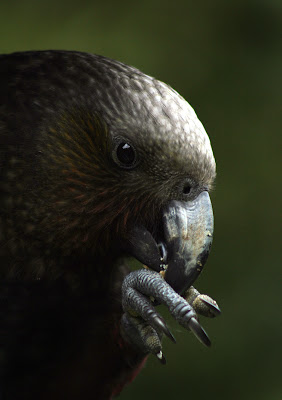 Well its been a whole three weeks since my last blog! But I've been SO busy. Firstly Troy and I went on holiday...well actually we went to Featherston for his brother Garys birthday. On the way down there was lots of snow on Ruapehu and we stopped off on the shores of lake Taupo to take photos of them. I found a dead Koura or freshwater crayfish and it had long spiky blue claws one of which I kept.

Our next stop was the Mt Bruce Wildlife Centre where we were just in time to see the Kaka being fed. These are birds living in the wild which fly in for food every afternoon at three. Actually they get there at least twenty minutes early and wait impatiently in the surrounding trees until the feed stations are filled then its all on. What 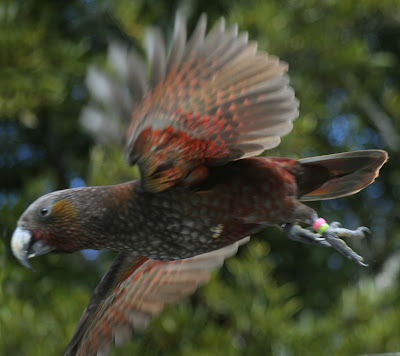 entertaining birds. Typical parrots, they are the monkeys of the avian world. They chatter, squawk and screech and drop almost as much food as they eat. We were standing right at the base of the feed stations and the kaka were flying between us back and forth from the food to the trees. At times they flew only inches from my face. They feasted on cheese, walnuts, and sweetcorn, holding the food up to their beaks with a foot.

In a number of large aviaries I got to see some kokako up close. 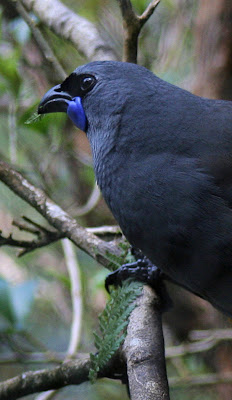 What magical birds these are, the way they move through the trees. They leap silently through the branches and watching them brings to mind the descriptions of huia I have read. (Same family of birds.) The blue wattles on each side of the bird face are curious looking things. They appear plastic and are the most unnatural colour. I observed one from about four foot away as it ate a fern leaf. They are the blackest of black around the eyes, altogether a very attractive bird. 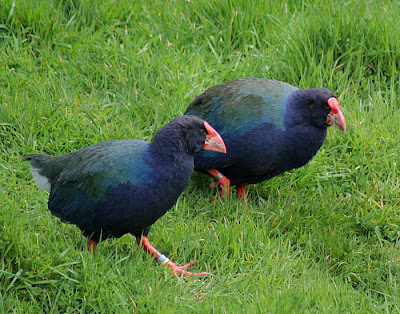 From the cafeteria you can sit on the balcony overlooking the Takahe enclosure. Big chunky green and blue birds like pukekos on steroids. First time I'd seen them. I would have liked to have gotten closer but time to get back on the road.

The birthday party was great, dinner at a restaurant then into Wellington to dance the night away at some Courtney Place nightclubs then walked to the backpackers for a bit of shut eye. The next day we drove out to the Castle Point Lighthouse. Wicked spot! There was a huge wall of limestone between part of the beach and the ocean and it was full of fossilised seashells. No matter how I tried I couldn't prise any free. I 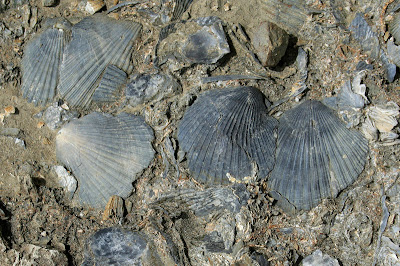 was like a kid trying to prise off a dollar coin that has been superglued to the footpath. Had to settle for a photo. I found a really cool thing on the beach, an egg case of some kind of shark. I showed Troy and he thought it was weird. The next day we went to Te Papa and in the natural history section we saw one very similar although the one I found was black in colour. I must do some research and find out exactly what kind of fish came out of it.

I got some good reference photos of the Huia at Te Papa. Tragic to see the beaks made into brooches and decorating cigarette lighters. 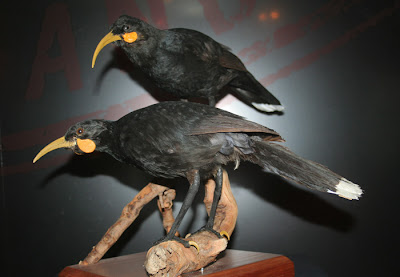 All in all we had about six days away which was really cool. I ended up with some great photos plus of course my shark egg case.
My blue crayfish claw had turned orange by the time I got home though....now how did that happen?
When we got home we spent the next five days packing our house up to move half a kilometre up the road into our new house! And the next five days unpacking so thats why its been so long since my last blog. I just LOVE the new place. Huge section with lots of big trees around and lots of birds everywhere. But more about that next time!
Posted by Mandy at 23:55