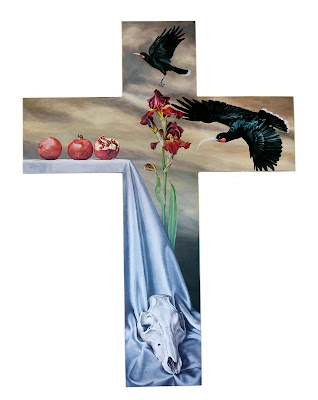 There is a limit of two entries so as a second choice I was going to enter my Kiwi painting except I sold it two days before the entries closed. That left only "The Golden Fish" as my second entry. I have an exhibition on in the "Next Door Gallery" in Birkenhead at the moment but the fish painting was too large to transport up there. 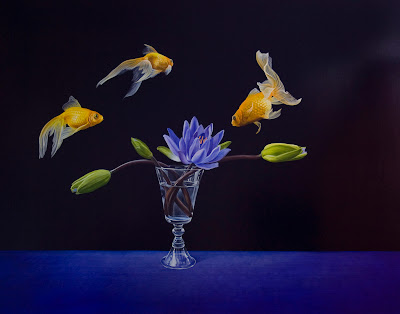 Long Story Short - my goldfish painting was selected for the exhibition and my new painting titled "Eroding Paradise" was not selected! Whats with that?!!! But I am not complaining. There were nearly three hundred entries and only sixty chosen for the exhibition and the judge Henry Symonds only chose one painting per artist. And on the awards night he gave a fab lecture which I felt quite priveledged to attend....til next year.
Posted by Mandy at 00:58

Murphys law! I think both paintings are fabulous, I am amazed at your talent! Congrats on getting a painting selected:)and on making a sale!

Gorgeous paintings Mandy. Shame the other didn't make it.

hmmmm....do you have that flying fish dream too? I often dream of little fish drifting around the house like slow-motion bumble bees. resting on the curtains. not sure what it means.
cool paintings! And your dolphin photos are really special!

Thanks everyone. Sorry I've been out of action for a week. I've spent the last 5 days helping my Mum and Dad move into Whkatane.
Melissa, I do dream about fish often but they don't usually fly in my dreams, just in my paintings.