I finished the third element in my latest painting today. A pair of Huia. I am going to have to "get a wriggle on" as my Dad would say as I only have eleven days before I have to deliver it for judging in the Molly Morpeth Canaday Art Awards. 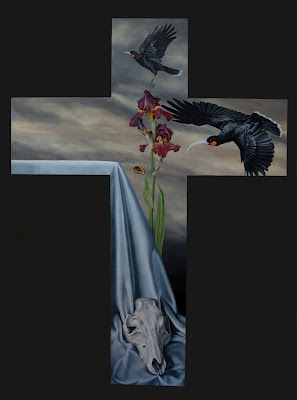 I am still struggling over a title. The painting arose from my thoughts on how the NZ landscape has been shaped and changed since mankind arrived, mainly from the point of view of large areas of land being cleared of native bush for whatever reason. So I'm thinking along the lines of "The Colonisation of Aotearoa" or some such thing except perhaps that is a bit long and ostentatious sounding? I dunno... Any suggestions? 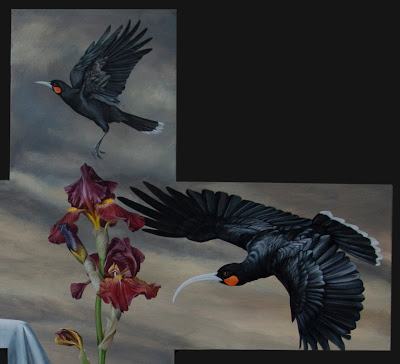 Actually the Huia were given government protection when it became apparent they were in serious decline, a result of petitioning by Taranaki Maori. The stupid thing was that the bird was protected but not their habitat so they were pretty well stuffed by that stage. Figuratively and literally.
Posted by Mandy at 02:03

Powerful piece! I can't help you with the title... I'm certain it will come to you.

Stunning! I love the Huia with it's wings outstretched especially. I also like your meaning behind it all.Debrina did a recent collage along a similar theme which she called 'arrival and departure.' That probably dosn't help you much though:)
Good luck with the show!

What about "Distinction and Extinction"

Thanks for your comments. "Distinction and Extinction" is a good title but I'd like something that reflects more the concept of colonising and clearing the land, changing the natural environment. Or perhaps I should go with something simple like that.....

Love this work Mandy. All the best for MM.