It seems like months since my last post but I've been SO busy. I've been helping my parents move house from Opotiki to Whakatane, who knew they had so much stuff!!! Especially my Dad who had a whole basement full of...well, everything imaginable to do with fishing and model aeroplane making paraphernalia. I spent yesterday taking things out of boxes, turning them over in my hands and thinking "What the hell IS that? 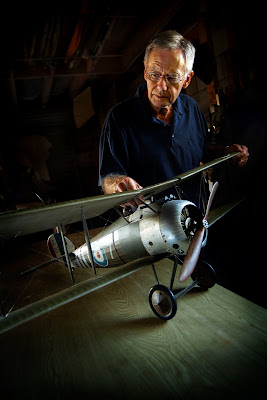 This is one of my favourite photos (taken by Troy.) Its of my Dad with a model WWI biplane called a Sopwith Pup which he built himself from scratch. My favourite plane of his is a much larger Ansaldo, also a WWI biplane which he built as a one quarter scale. I should get a photo of that one to post. It has a chainsaw motor in it and it flies like a dream!
Anyway once we get Dads garage sorted its time for me to do up the sleepout next to it which I am going to rent for my NEW STUDIO! I'm so excited because I can decorate it however I want and altho its only about a third of the size of my last one it'll be just brilliant!
The Folks new place backs on to the Whakatane river, its just over the fence so when its really hot I can swim during my lunch hour. I can walk along the stopbank to the saltmarsh to photograph herons etc & the other day Moko the dolphin was just a little way down the river swimming with the local kids! 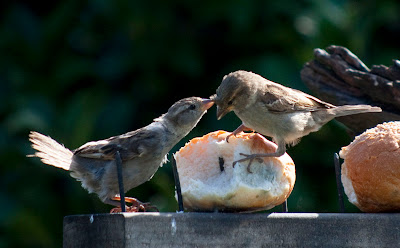 During our morning coffee breaks we sit out on the deck and watch the birds fight over bread we put out on the bird feeder. Here are a couple of shots I took during the week of them. I like the action shots of their tussles over the best feeding spots, the little buggers can be quite brutal actually. Talk about survival of the fittest! 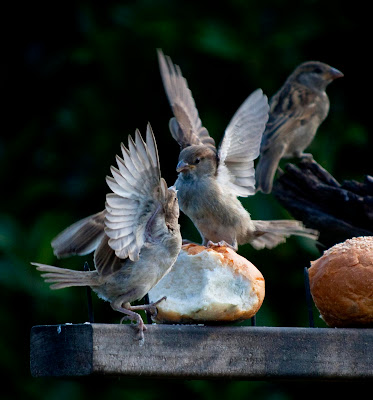 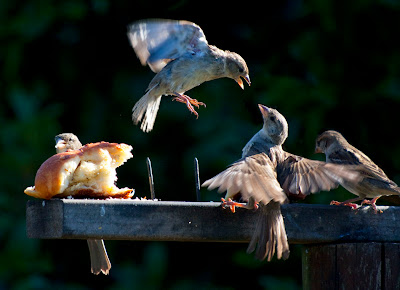 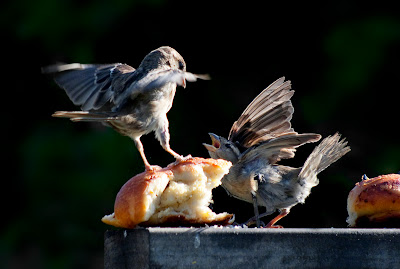 What fantastic shots, I just love sparrows. They have a real community/hiarachy and make sure the other birds know it! I spend a lot of time watching sparrows.

Your new studio sound great, perfect even! Troy's photo of your Dad is awesome, I can see why he does it for a living!

My last exhibition went really well thanks. I sold one work and there are buyers (husband and wife)trying to decide between two paintings so I'm hopeful for a second sale there. Had great feedback from that gallery, the owner is awesome.

Great photos Mandy. Nice to hear that the new place suits you as well as your parents. Hi to Rita from me. Hope she'll still be active in Opo Arts society.