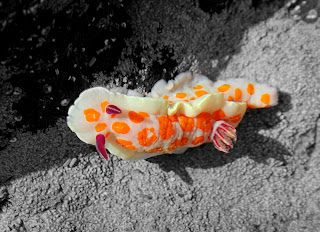 I'm a nature loving artist with a passion for the wild outdoors. OK so sometimes I don't go that far outdoors, maybe just in the backyard but you'd be surprised what you can find lurking there. (Especially when you haven't mown the lawns for the last six weeks!) I find cool stuff that inspires me, I photograph it, and then if it REALLY inspires me I paint it. I particularly like rockpools and am working on a painting at the moment which includes a rockpool, pohutukawa and a pair of oystercatchers. (They are a type of shorebird found in New Zealand where I live.) My tribute to Michael Smither. Last Saturday I took a trip down the coast and found this really cool nudibranch or to be more specific "Ceratosoma Amoena." Or to be LESS specific, a really cute seaslug! No plans at this stage to paint him although he might make a great surrealist subject.

You'll never guess what I photographed this week! The most amazing bird - a WHITE Tui. Yes you read right, I'd heard rumours of sightings around the Opotiki area and guessed it to be an albino. By pure luck I happened to be five mins away from some friends who had a row of taiwanese cherry trees in flower. These are a popular food source for tuis who love to feed on the nectar in the blossoms. Got the tip off by phone and as I never go anywhere without my camera I was soon marveling over this most enchanting of creatures through my 75-300 zoom lens! But it was obviously not an albino as it had a dark beak, legs and eyes. Through correspondence with a zoologist Dr Paul Schofield who works for Canterbury Museum I found out this tui is afflicted with a rare genetic condition called leucism. Fortunately leucism only seems to affect colur so it doesn't suffer from poor eyesight as an albino would. She's a strong healthy bird. ANYWAY I got some photos to prove I'm not making it up.Check thi 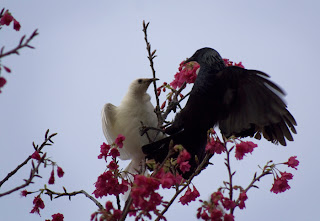 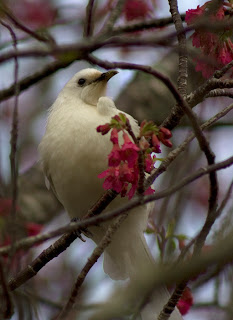 I'm guessing by the birds size she's a female. And she's such a georgous bird too. In sunlight she's a lovely creamy colour. Might have to paint her but not sure I can do her justice. I'm painting for an exhibition in October in conjunction with the "Birds Aplenty" festival held in the Opotiki Heritage Art Centre. I'm sure the locals would be interested to see their white tui in a painting. In some regions the Maori believe its unlucky to see a white tui, I feel very lucky to have seen it! 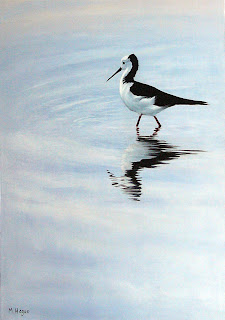 So before I finish my first post I suppose I should show you a couple of my paintings. In the next few weeks I intend documenting the creation of a painting from inspiration to completion.... thats the plan anyway. The painting on the left of a pied stilt I sold at the Mazda Artworks show at the Auckland Hilton Hotel last year. (I'm working on a huge painting of a kotuku for this years Mazda Artworks.) The painting below is a New Zealand Scaup duck. Mark Airey from the NZ Fish and Game Council saw this and asked me to submit some photos of my paintings to Fish & Game so I could be considered to provide the artwork for the 2006 duck stamp. I got the commission and was asked to paint the scaup on the strength of this pic! The stamp was released feb 2nd to commemorate World Wetlands Day with a portion of proceeds going to the conservation of NZ Wetlands. Kind of ironic that they give one to everyone who buys a duck hunting license HA! 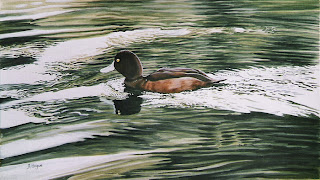 This is great info to know.