After the fiasco with the couriers I went to the park to de-stress.....a great place to unwind. Some spring flowers out, daffodils etc, deep breaths, deep breaths. (See Blog below to understand why I'm a nervous wreck.) There are lots of tuis there, one in his favourite perch in a big tree with white berries. He sits there overlooking four cherry trees. Now and then he lands in the cherries to sip nectar from the blossoms but otherwise he sits in the big tree and now and then swoops down to chase a sparrow out of "his" cherry trees. Silly bird, the sparrows don't even steal his nectar. He just likes those trees all to himself.

There are lots of blackbirds around. They spend most of their time on the ground eating worms which somehow they hear in the ground. You can see them listening with their heads on the side before hopping a few steps then stabbing their beaks into the ground to pull the 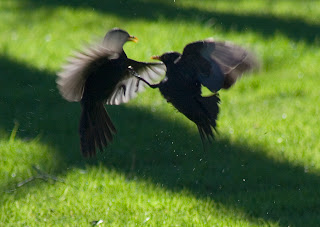 worm out of the moist soil. A fight broke out between two of them over territory I guess and as I had my camera I took some photos. 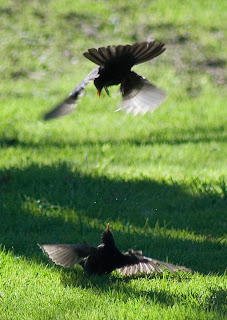 This afternoon I started another painting. For some reason I seem to go along with a certain style or theme or size and then all of a sudden I need to paint something the opposite of what I have been doing. For instance my huge kotuku painting I began after I'd been doing some really small canvases. So the one I just started is very dark, very bold and very stylised. I will post this pic and update as I go along. At this stage its far from finished and will change lots as it evolves. I think it will anyway. The photo came out pretty dark but never mind. 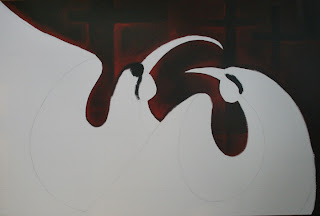 The bird on the left looks like it has sunglasses on but thats just where I started to paint in the black head. The Huia was a unique species in that the male and female both had very different shaped beaks. I have exaggerated this a bit. This will not be a realist painting anyway. I'll be interested to see how it looks when I've finished!
Posted by Mandy at 02:33