A bellbird in the bottlebrush 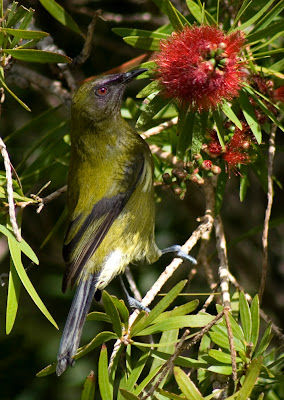 My main job today was to put the finishing touches on my one metre by one metre Kotuku painting and package it up to send to Auckland for the Mazda Artworks event at the Hilton. I put an isolation coat on but it was such a big painting that it began to dry before I'd finished and looked streaky. I just had to walk off and leave it cause I knew if I tried to even it out I'd make it worse. It was all going pear shaped so I just took off to the park for half an hour to de-stress. I was trying to photograph tuis in the camelias and taiwanese cherry trees but the sun went behind the clouds and then when it came out the birds were in the wrong places for a clear shot. Bugger! I swear they are one of the most difficult birds to get a good shot of.
But then I heard a bellbird in a bottlebrush tree and it let me get quite close and get some photos. Quite difficult to tell the difference between the songs of tui and bellbirds.This pic I was really pleased with. I think its my first ever decent bellbird photo! Such a pretty bird with the sun on it. He was not at all shy unlike other bellbirds I've come across, maybe because he was too preoccupied with the bottlebrush flowers he was feeding on. Even chased a tui away from his food source!
Fortunately when I got back to the studio my painting had dried evenly so six metres of corrugated cardboard later and its ready for the courier!
Posted by Mandy at 01:45

Greetings from Devonport, Auckland. Thank you very much for your permission to add your photos of the white tui to our site and newsletter. I'm really pleased that Kay (one of our artists) told us about the white tui. We just send out our newsletter to all our clients, so hopefully you will receive quite a few hits too.

No-one I spoke to has ever seen a white tui! Great shots by the way, thank you!

Have a great day.