On Friday morning we set off on our intrepid journey to the bottom half of the North Island. Five and a half hours later on a drizzly evening we arrived at Garys house in Featherston. Unfortunately the rain persisted all weekend so sightseeing was limited to a trip to the Early Settlers Museum at the end of the street. Housed in what was once a school building, now over 100 years old, we walked into a poorly lit dusty collection of memorabilia overseen by a woman who seemed as old as the collection herself. Featherston was the site of a Japanese P.O.W. camp with an intriguing history. After a while the attendant was replaced by an elderly gentleman who remembered to turn the rest of the lights on which helped immensely! All in all $2 well spent.
Sunday night we drove to Wellington & on Monday visited the Karori Wildlife Sanctuary. 225 Hestares of land encircled with a predator proof fence, the park is a conservation island and includes many rare and threatened species. We were asked to search our bags before entering to make sure they didn't contain any mice, rats or stray cats that may have stowed away without our noticing! Strangely enough about the third species we came across was a mouse whose furry brown ass was sticking out of the hole he was digging in a clay bank. 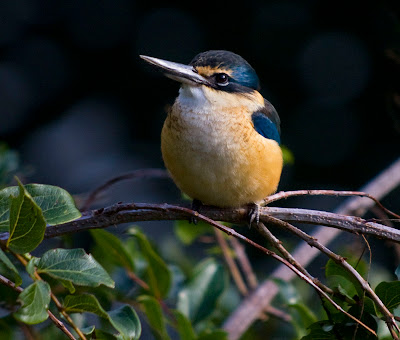 Without the presence of predators (besides the odd mouse obviously) the birds are extremely laid back and easy to approach as this kingfisher demonstrated. 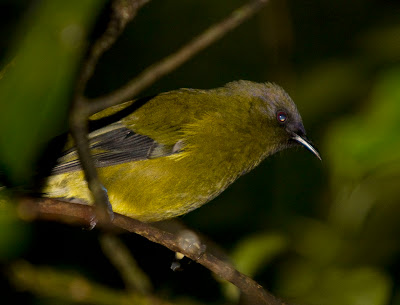 Bellbirds were common around the feeding stations set up in the park. 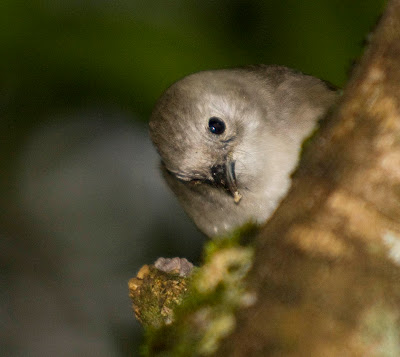 I was keen to see some robins and thought I had photographed one feeding in the tree above but I'm not actually sure wether its a robin or whitehead (since I've never actually seen either before.) I was delighted to see this beautiful saddleback feeding next to the track altho it was rather hard to photograph. Such georgous colours and a beautiful voice. 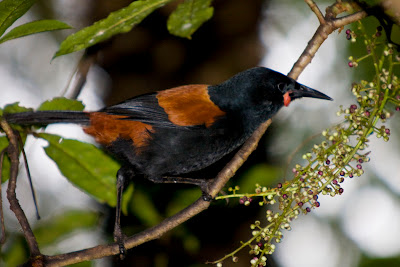 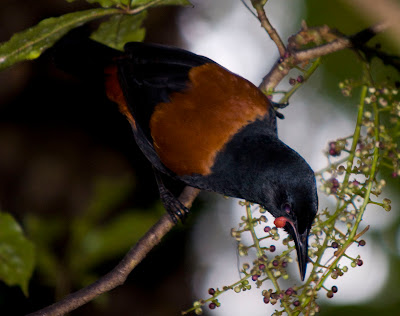 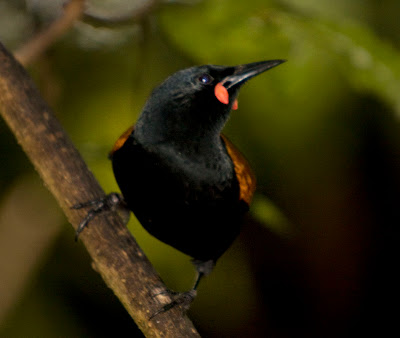 Other species of interest we saw were Kaka, stitchbirds and a pair of falcon. Also plenty of tui, fantail, shags, & scaup. We didn't see the elusive tuatara or weka but our visit was cut short when it began to rain. Bugger!
http://www.sanctuary.org.nz/
Posted by Mandy at 15:48

Love the kingfisher and Saddleback photos! I adore Saddlebacks, but couldn't get any shots the one and only time I've been to Karori, which is an amazing place, and my favourite bird sanctuary so far.
I'm so glad I found your blog... I have wanted to get into wildlife photography for a long time, but had thought I wouldn't be able to, unless I left NZ (which I currently can't afford to). Your blog has reminded me just how amazing and how big the variety of birdlife we have here in NZ, and has very much inspired me to chase my dream of wildlife photography, even if, for now, birds will be my main subject.

Thanks for the feedback T'zignz. Some of my favourite photos have been taken in my own backyard so while we may not have the most spectacular wildlife, we usually don't have to go far to find it. Best of luck with your ventures!

Happy holidays! Hope the rest of your journey countinues to be fantastic.The lions have done a lot of work to keep this sanctuary as nice as it is and it's good to see it having it's own post here.