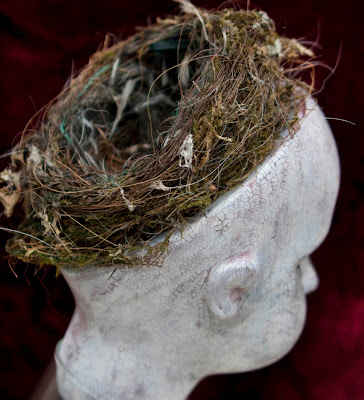 This is the subject in my latest bird cage sculpture. Its still under construction, I have added three little blue eggs to the nest in the head. This was a porcelain dolls head I bought at a garage sale. I painted it with crackle glaze.
It looks strangely selfportrait-ish, (so I made up a new word,you know what it means) and I don't mean because I'm an egg-head. Its those fat cheeks.... 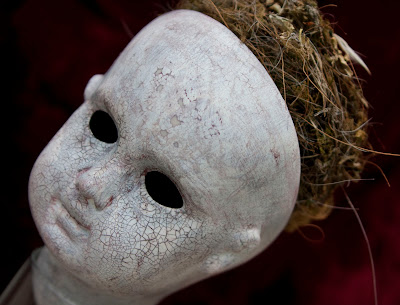 I have neglected to show you what my Mum did with the mummified rat I gave her. She painted it with several coats of shellac, put it on some little wheels and made a little carry-case for it. Here's a pic. OK so its not exactly an Armani handbag but she exhibited it in Opotiki and sold it! Actually I think its way better than an Armani handbag (is that how you spell Armani?) because
A. Its a one and only original.
B. Its unique and handmade.
C. No animals were intentionally harmed in its creation! Unless you count the insects whose wings were used in the making of the shellac varnish. Yes it is true- Shellac is made from insect wings, you mix it up with methylated spirits. I made some today, every time I make it I wonder who discovered that if you add meths to insect wings you get varnish??? And HOW did they discover that??? Go figure. 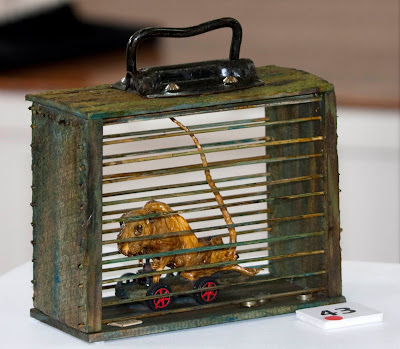 Oh and this is another of her creations. I really like it but its not something I can really go into because it just is what it is. Made from an old wooden frame, doll parts and possum bones. Cool! 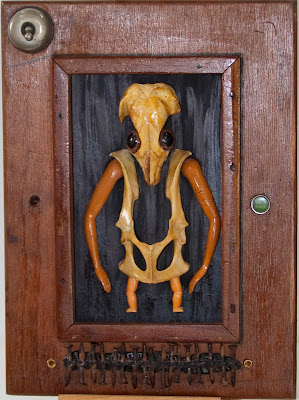 Thanks Lisa! Hope you had a great Xmas & all the best for the new year. :)

Yes these are wondrously weird and refreshingly unique! It's so great to see something different and cool.