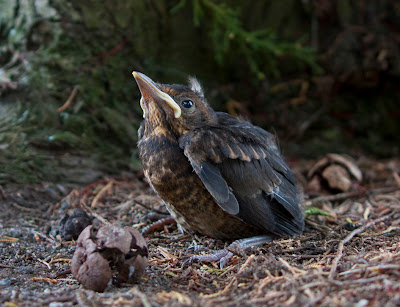 More baby birds leaving the nest every day around here. This baby blackbird was one of two on our front lawn just before Christmas. Unable to fly, they sit and cheep til Mum comes and pokes a worm down their beaks. Because they can't fly some people think they need saving and pick them up at this age. Its best to leave them to their Mums....& Dads? ActuallyI'm not sure if Papa blackbird helps out when they are this old. Different species have different rules when it comes to child support. 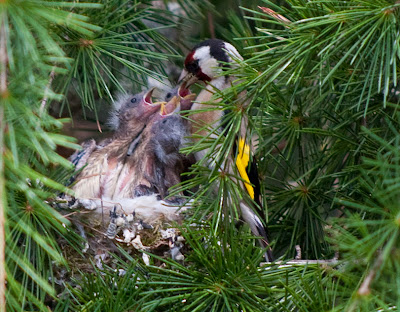 This was the adult goldfinch feeding the babies outside our front door. At this stage I thought there were three babies. With this family both parents helped out. The juniors are kinda funny looking here I must admit and very demanding! They get better looking with age. 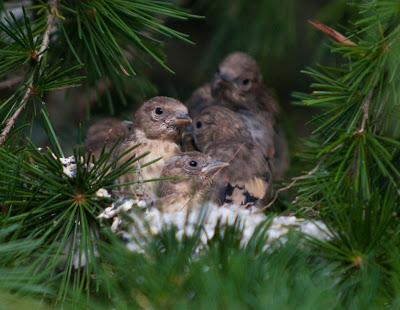 I took this two days before Xmas. I was heading off to Tauranga to spend Xmas at my sisters and saw the babies that morning preening themselves and flapping their wings. I was sure they were heading off that same day and what do ya know there were FIVE of the little buggers! It was getting very squashed in that nest. When we got home day after Xmas the nest was empty. No sign of the lovely bright yellow on them yet. I guess they need to be camouflaged til they become independent.

Yay to the mummy bird for raising such a big bunch of chicks! So glad you photographed them before they flew the nest.
I found a nest the same day you posted this, no idea what bird made it but I bought it home...got to busy to photograph it and the next day it had been destroyed by a cat (an egg or 2 had broken inside so I guess they were hunting.) I was so bummed! Amazing nest that had a sock like tunnel from the opening to the 'cup'. I did get an intact egg from it which I blew out (funny coz I gagged over washing the chicken before cooking it but handled blowing the yolk from a bird egg...) but the moment in time for photos was gone:(

Oh what a shame! It sounds like a grey warblers nest perhaps. Was the egg tiny?