I just realised its been a while since I posted any of my paintings. Mainly because I have been working on another large painting for the Molly Morpeth Canaday Art Awards in January and its taking me a while. Paintings for awards are created a whole lot differently from paintings for galleries as you only need to impress one person, namely the judge and they will be someone who appreciates originality & anything goes. Thats why my current painting includes a goat skull. But I seem to be collecting "weird" paintings that I have done for competitions but no-one wants to hang on their wall. Too bad, they're the ones I like the most.

The above painting is one that has been very poular with the public and I like it too. Its called "Kaka Beak" after the red native flowers named for their shape. The bird in it (obviously) is a Kaka, our native forest parrot. Now and then in early spring one or two kaka visit certain trees in the Whakatane township to feed.
This painting will hang in the upcoming exhibition by the Opotiki Art Society opening on the 27th November, 13 King St, Opotiki. Oh and I've also just hung four works in the Whakatane Museum Foyer for a month. Below is a kaka I photographed at Mt Bruce a year or so ago. One of my favourite pics, think I've posted it before. 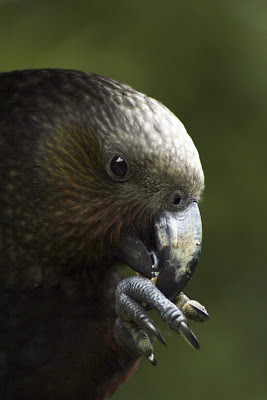