A Barrel of Bees

Troy and I have just spent two awesome weeks in the South Island. I took a few hundred photos and so far I haven't even begun to sort through them. I'll share as soon as I can. Til then here's the drama that's unfolded in the last few days.

When we left there was a family of young starlings being raised in the oak whiskey barrel sitting on our front porch. I figured they would have fledged by the time we got home but I never expected that a hive of wild honey bees would take their place! 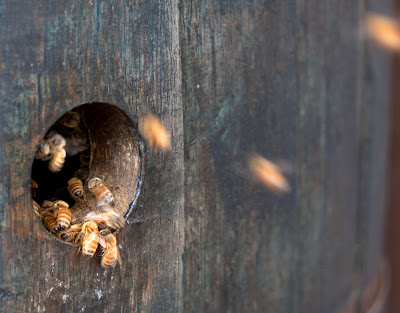 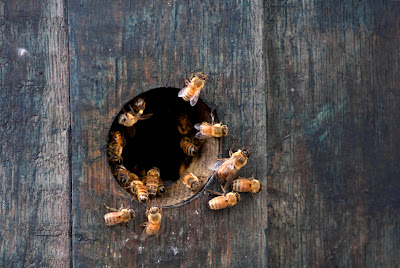 A steady trickle of bees were coming and going in the busy manner that bees have. Now I like bees and I'm well aware they are in a dangerous decline worldwide due to sprays and poisons among other things. Bee stings I'm not so keen on - actually I'm a big sook when it comes to that so I was wary about having a hive three feet from my front door. It was lucky one of Troys best mates Misho is a bee-keeper so between the two of them they worked out a plan to move the hive without the total destruction of our barrel. It was tipped upside-down and Misho cut a hole with a skillsaw (meanwhile we were safely inside cowering in the kitchen - I took this shot through the sliding door.) 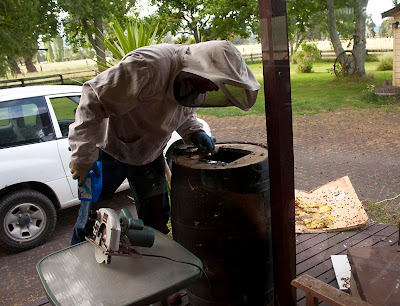 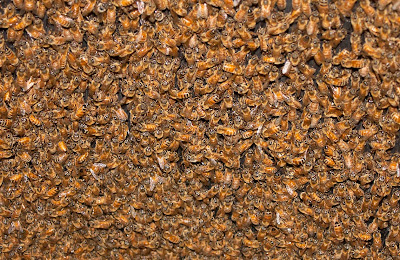 However after Misho assured me the bees were not going to attack I was brave enough to get this shot looking down thru the hole in the barrel, the whole interior was covered in bees!!! Double click on the above photo to enlarge, its kinda freaky! 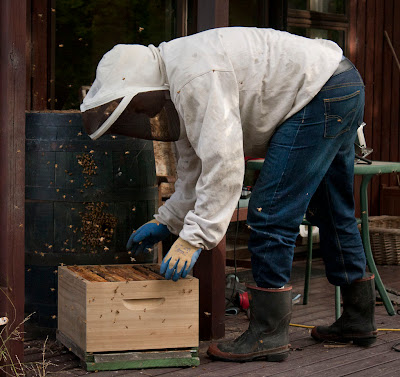 A bunch of bees were collected from the barrel interior and dropped into a bee box. Misho then somehow found the queen amongst all those hundreds of bees and put her in the box then put the lid on. He then collected as many bees as he could and deposited them outside the box. By nightfall they had all moved into their new quarters to be close to their queen! 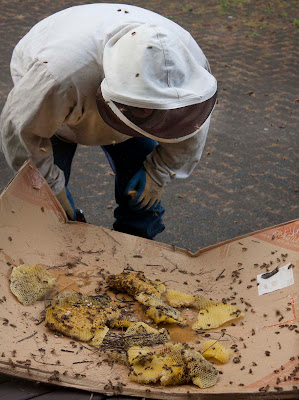 Unfortunately the honeycomb couldn't be saved but Misho placed the broken pieces in front of the bee box as the bees eat up the honey so they can use it in the new hive! Pieces of the remains of the starling nest were gummed up in the sticky mess. 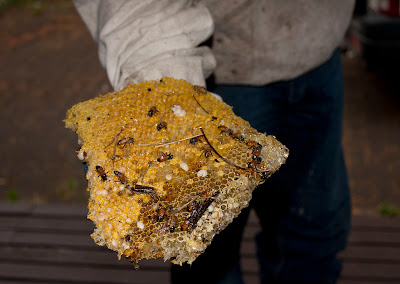 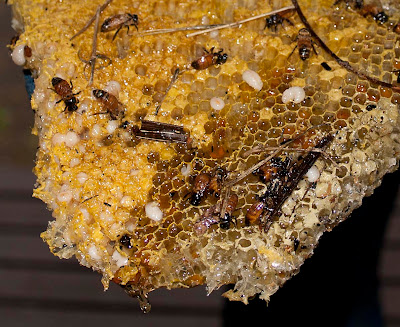 Some of the honeycomb is used to house the young bees in the grub stage, some is used to store honey and some stores pollen (if I remember correctly.) A few bees got drowned in the honey when the hive was tipped upside-down but all in all it was a successful relocation. I was amazed at how much honeycomb the hive had made in less than two weeks. All in all it was quite fascinating learning how they work. In a couple of days Misho will add another layer to the bee box then take them to his place. And in a few weeks Troy and I will get a share of the lovely golden honey! Mmmm-mmm. A shame we couldn't leave it in the barrel, we could have had whiskey flavoured honey. But then again it would probably have had overtones of starling poop....eeeeyew!
Posted by Mandy at 02:06