This morning Troy got a phonecall from neighbour and Whakatane District councillor Bill Clark asking if we would like to photograph a nearby waterfall. Very few people are aware this waterfall even exists despite it being in a council reserve so Bill plans to educate the public in the hope more people can enjoy it. In addition to the waterfall there is a dam and old powerstation originally built in 1928 but now no longer in use.
Troy and I had unsuccessfully tried to find the powerhouse and waterfall before so jumped at the chance to have a guided tour. Bill drove us to the Karaponga Reserve where we wasted no time heading off up the track alongside the stream (which after recent rain was resembling more of a river.) After a short tramp we left the track and scrambled down a bank toward the stream. Admittedly we had been warned there would be a stream crossing but I'd been anticipating something kneedeep. The stream was flowing pretty fast and I must admit I was a bit hesitant. Bill had gone before and held out his hand for me to grab. I stepped in to the icy water and made sure my footing was secure. Troy grabbed my other hand as I took my second step and the water bubbled up around my thighs. For a moment my arms were being pulled in two directions and then before I knew it I was on the other bank. 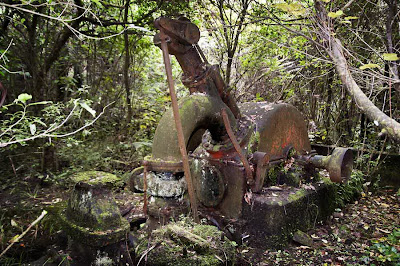 We found the old pump sporting a patina of rust and moss. After re-crossing the stream we found the track again and followed the old pipe that carried water down to the pumpstation. Suddenly Bill detoured off down a very steep bank back towards the river. Reluctant to follow with my camera I relinquished it in a nest of ferns then followed into the near vertical abyss. This was quickly beginning to resemble an "Intrepid Journey."
At the bottom we negotiated along the riverbank as the rapids became steeper and steeper and from the noise I could tell we were nearing the falls. Finally I looked up to see the waterfall which flowed from behind a ridge so that I couldn't see its source. "Oh thats not the falls" said Bill, "We have to cross again to see the falls." I laughed at his joke looking at the torrent of white water cascading past then realised with a sinking feeling that he WASN'T JOKING! I told him I wasn't crossing the river and he reckoned it was easier than the first time we'd done it so I was talked into in. This time the water swirled up to where my inadequately short legs met my body and I could feel the current tugging at my trackpants. 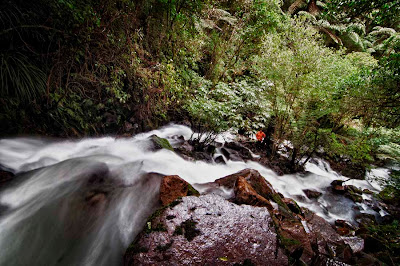 Check out the little blob of orange in this photo, its me on my little cowardly sanctuary. The photo was taken by Troy from the clifftop above.
There was an island of rocks halfway which I scrambled up onto, my pants so heavy with water that they almost stayed in the river without me! I watched Troy follow me with a few thousand dollars worth of camera gear in a pack on his back. At that point I refused to go any further and stayed put on my Island with a raging torrent surrounding wondering if this is going to turn into an episode of "I shouldn't be alive!"
Meanwhile Troy and Bill crossed the second part of the river and scaled a cliff of mossy wet rocks to the base of the waterfall. (Which incidently was out of my sight.) Troy got his shots, they rejoined me on my Island and the three of us safely crossed back and a few minutes later I was clawing my way back up the vertical cliff to the track. 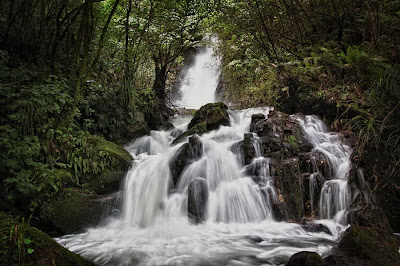 Further on we came to the dam which was duly photographed by Troy who set his tripod up in the middle of the (now much shallower) stream bed. 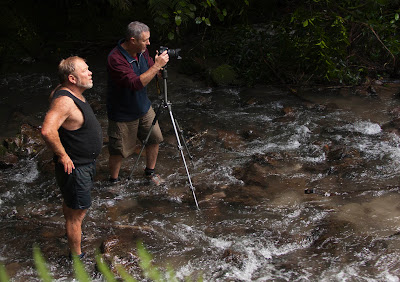 The walk back was much more civilised as our tour guide took us to a wide flat track through the bush. We came out to a fenceline halfway down with a lovely view of the Rangitaiki Plains stretched out in front of us. 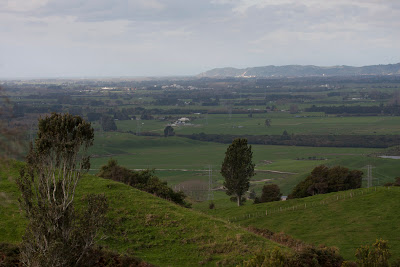 So as for the elusive Karaponga Waterfall, well I still can't say I've seen it but I can say I've seen the photos! And I have to admit almost all the pics are Troys except the one with him in it obviously. Oh, and this one is my photo of  a leaf laying on the old metal waterpipe which came out kinda randomly cool. Actually its my favourite photo of the day. 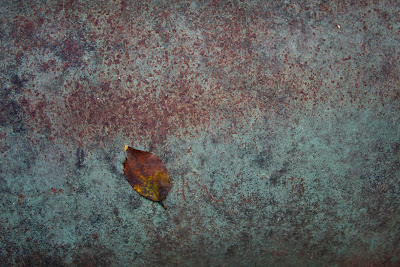 Haha. The things we do for a photo! Good on you for getting out there and going as far as you did.Looks like it was dangerously fun!

Thanks Lisa! Yep its good to push yourself now and then but sooner or later the old self-preservation instinct kicks in. Makes me appreciate a comfy seat on the couch with a cuppa tea - I must be getting old!