Of dead whales and sleepy seals.

What a strange day I've had! We were on our way to work when Troy got a text to say there was a whale stranded on Ohope Beach. Of course he had to photograph it for the newspaper so there was no way I was going to miss out. Driving over the hill I was hoping the whale was going to be ok and imagined it being refloated and swimming off through the waves to a happy ending. Bit of a different story when we got there. It wasn't a stranding at all - more like a dead whale being washed up on the beach after floating lifelessly around in the ocean for a couple of weeks. 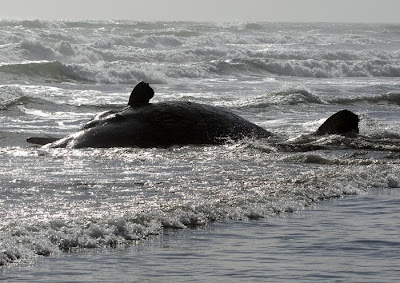 I'm not certain what kind of whale it was, perhaps a minke. Really interesting lower jaw on the creature, very narrow compared to the width of the head so not sure what it would be eating. Perhaps squid and other fish. It was really stinky downwind. The guys at Dept of Conservation were going to bury it this afternoon. What a job but someone's gotta do it! (Glad I didn't have to dig the hole.) 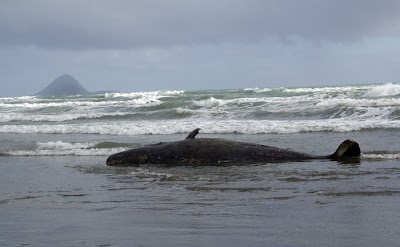 By the way, the distant Island in my second photo is coincidentally Whale Island.
So that was my morning, observing a rotting whale carcass being rolled around in the ocean! I hope it died of natural causes.

Actually I was back in my studio at ten a.m. so I did get some work done before I picked Troy up at mid-day. He told me something over lunch that I simply could not believe so he took me to see it for myself. Let me explain. 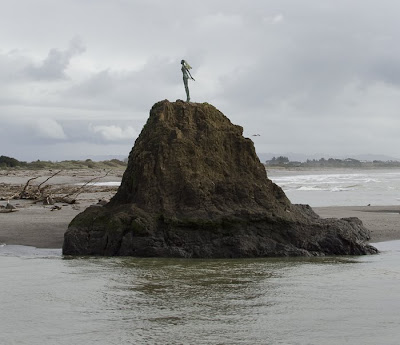 For those of you unfamiliar with my hometown of Whakatane let me introduce you to one of our most recognisable landmarks -"Wairaka" or " the Lady on the Rock." When the Mataatua waka first landed at Whakatane the Maori men set off to explore leaving the women on the beach. The tide came in and the waka or canoe began to float away. It was custom that only the men were able to man the canoe so one of the women,Wairaka called out "Kia Whakatane ake i ahau" which roughly translated meant "let me perform the duties of a man." She then brought the waka back to the beach attaining heroine status in the process. This statue of Wairaka was erected on the rock at the rivermouth in the sixties (I think.) I'm not sure how high the rock is that she stands on but the statue herself must be about seven foot tall.
So check out this next photo.....here is Wairaka in all her bronze glory (complete with seagull accessory) and there at her feet like a little loyal dog is.....a SEAL!!! A bit skinny 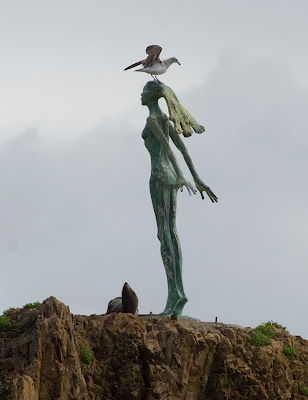 admittedly but very much alive and it must definitely be fit to have been able to get up there at all. Its not uncommon for seals to come ashore this time of year, the young ones get a bit under the weather and need to rest up a bit especially after stormy weather (and goodness knows we've had enough of that!) BUT whatever possessed this seal to scale such a steep rock......I have no idea. At least it was safe from harrassing dogs & humans so perhaps it wasn't such a bad idea after all!
Apologies for any incorrect spelling or historical inaccuracies with regard to the legend of Wairaka. I have retold the story how I remember it told to me at school many years ago.
Posted by Mandy at 02:17