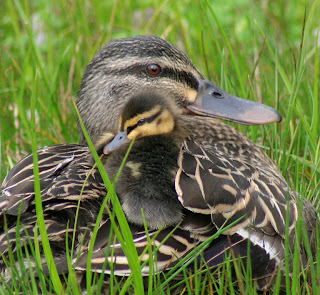 Aaaah, the first of the ducklings....it must truly be spring! I saw a mother mallard and eleven babies in the park last week. I saw her again today resting with a baby on her back. I guess she only had room for ten beneath her unless of course the hawks and other predators have already taken their toll. I saw a hawk flying low over the watercourse and I'm sure he was looking for ducklings for lunch. When I lived on a little farm in Opotiki I remember the hens and their broods of spring chicks that grew fewer in number day by day. I heard a commotion one day and I rushed out to see a hawk flying off with a chick clasped in each foot! I took to putting cereal out each day for the hen and 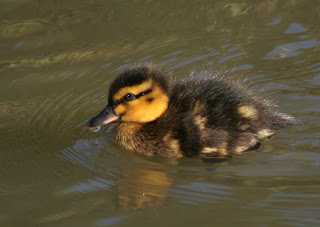 her last four babies to encourage them to stay close to the house and ended up with five chickens strutting in the front door every morning demanding their cornflakes!

I am working on a new painting of Pukekos. I am painting some studies on paper then will make a collage and put them all together on one canvas. It will be kind of like my pied shag painting. I enjoy working like this because I can experiment on paper and if I don't like the results I simply don't include them in the final collage. Theres no pressure to get it right.

I would like to include some pukeko feathers I've decided. I passed a dead pukeko on white pine bush road on Sunday, (roadkill victim- poor thing) but I wish I'd thought to pick it up now. They are strange birds though, quite colourful with the sun on them but the feathers on their own are quite dull and lifeless. I always think feathers look better on a live bird no matter what the species anyway.

I've been so busy lately I've hardly had the chance to get out with my camera. The only free time I've had its been raining anyway. I stayed with Mum and Dad in Opotiki on Friday night and learned of a place near the township that gets visited by five Kaka! I was dying to contact the owners to see if I could get over there but we had to get back for a twenty-first. I might see if I can sneak an afternoon off sometime soon..... 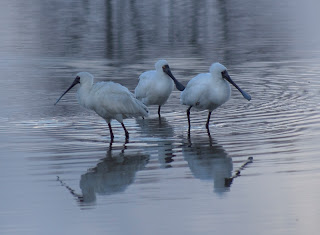 noticed the spoonbills are still at the Apanui salt marsh. I thought they may have buggered off since those noisy workmen have been working on the new footpath along the top of the stopbank but they just moved away a little further up the river into the rushes. They must be off soon to their breeding grounds wherever they are. Heres a photo I took of them a couple of months ago. They look kind of goofy on the ground. They're quite comical creatures but they look lovely in the air as they fly with their necks outstretched unlike the kotuku who flies with his neck folded in an "S" shape. Interesting to note the black tips to their wing feathers. The black pigment means the feathers are stronger and less prone to wear than white tipped feathers. 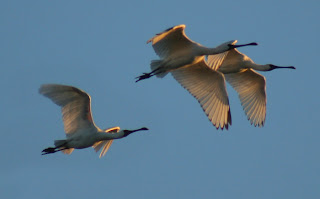